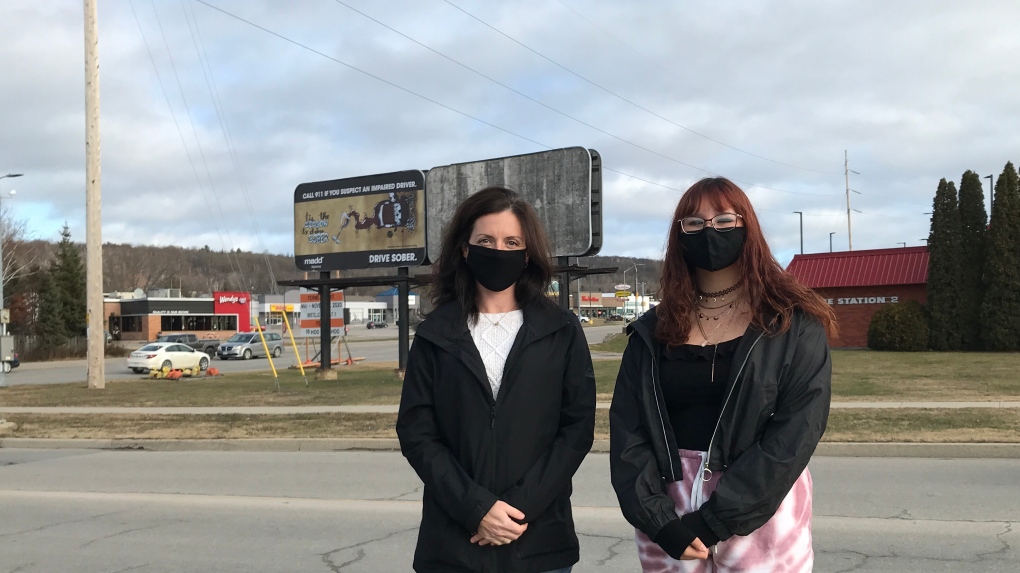 NORTH BAY -- It’s an important message every day of the year for drivers, but this year those too young to get behind the wheel are also joining the campaign.

“Even though I’m not a driver, it’s still dangerous for like even me to be out on the roads in a car with someone else,” explained 14-year-old Taylor Laing.

“It might not be me or anyone in my car that’s drinking and driving, it could be someone else on the road.”

MADD Canada launched its Red Ribbon Campaign at the beginning of November, reminding everyone to drive sober and plan ahead for a ride home.

The idea is for drivers to put a red ribbon on their car to show their commitment to driving sober and honour those who lost their lives due to impaired driving.

In North Bay, the MADD Canada Nipissing Chapter went one step further, putting up a billboard at the corner of McKeown Avenue and Champlain Street so that drivers could see the message loud and clear.

“The campaign, as always, is about awareness and it started off on a very strong food despite some challenges that we had due to COVID and not being able to gather and spread the message like we normally do,” said Chapter President Eric Celebre.

“We’ve had, so far, several people reach out to us wanting their ribbon and to get that onto their purses and their cars, anywhere you can display them.”

This year the billboard is even more special to the community as Laing is the artist behind the design.

“She has a very clear understanding of the importance of this cause and the reason that that’s important,” said Celebre.

“As well as anyone in her age category or any age category for that matter, is that we need to work together as a community and as a country to get that message out there and that starts from just little ones understanding the importance of sober driving.”

Laing participated in a “paper bag contest” last year. The design ended up winning and being printed onto the billboard for a months time.

“It’s pretty surprising, I didn’t think it was going to get this big. I thought I was [just] going to win a contest,” said Laing.

“I hope that it does impact a lot of people. I think it’s very dangerous to drink and drive, not just to yourself, but it’s a danger to others,” she adds.

“I was able to look at the stats for the first 10 months of this calendar year and we were at 72 people that have been charged with impaired driving related offenses compared to 49 last year. So we’ve seen a jump and that’s concerning to us,” said Schultz.

“There may be some explanation to it in the fact that our officers have received extra training in regards to drug recognition so we have seen a big increase as far as drug and the charge is impaired by drug or alcohol.”

According to MADD Canada in 2014 “road crashes claimed an estimated 2,297” with approximately 55.4% of those resulting from crashes in which an individual was positive for alcohol and/or drugs.

“We do have victims in our community unfortunately,” said Celebre.

“You know, when we say just in our community there’s a lot of people that have reached out to us that are requiring ongoing support. On a large level the average number of Canadians that are affected by impaired driving on a daily bases is four. So when you think about four people dying every day on average that’s an astronomical number.”

“People who are affected by impaired driving is about 65,000 a year. That’s way too high. We aim to one day have those numbers at 0. But we’re not there yet. We’re not even close. So we’ll continue to get out there and spread the word,” she adds.

This year volunteers are delivering ribbons to drivers who are interested in North Bay.

Although the COVID-19 pandemic has cancelled a lot of large gathers, officials say that the concern is still there this holiday season.

“We’re not sure what to expect, but prepare for the worst,” said Schultz.

“We’ll be out there and we’re hoping that all our officers have to do is wish people a happy holiday season.”

However, the fact that younger people are getting involved with spreading the message is encouraging.

“I think it’s great and it really shows that it’s really engaging with the young people and that’s the message we have to go taking forward,” said Schultz in regards to Laing’s artwork.

“Especially with the legalization of certain drugs, we have to make sure that everybody is aware that impaired driving is not just an alcohol thing this is a drugs as wel. So if you’re taking any type of substance that alter your ability to drive properly, you shouldn’t be behind the wheel of car.”