A new device designed in Sudbury is making waves in the medical world and is now getting some big support from FEDNOR.

On Thursday morning, Sudbury MP Viviane Lapointe announced more than $500,000 in funding for the company IRegained and its new device, the 'MyHand System.'

The contraption looks like a futuristic video game, but the company's research has found it helps stroke patients get much of their mobility back.

"We are in the prototyping stage right now and entering into the clinical validation stage," said president and CEO Vineet Johnson.

Johnson is anticipating that stage will last about 12-15 months and then they'll be able to move into market adoption, providing them with the chance to be able to commercialize the product.

"A number of stroke survivors have been helping us test the device and in the process, they're getting some hand-function rehab," he said. "Across the spectrum, all of them have been showing some improvements over that duration."

IRegained credited the support of NORCAT in Sudbury for helping them to reach the level they're at now. If all goes well, Johnson hopes they can get the device in hospitals, rehab centres, even have home units. 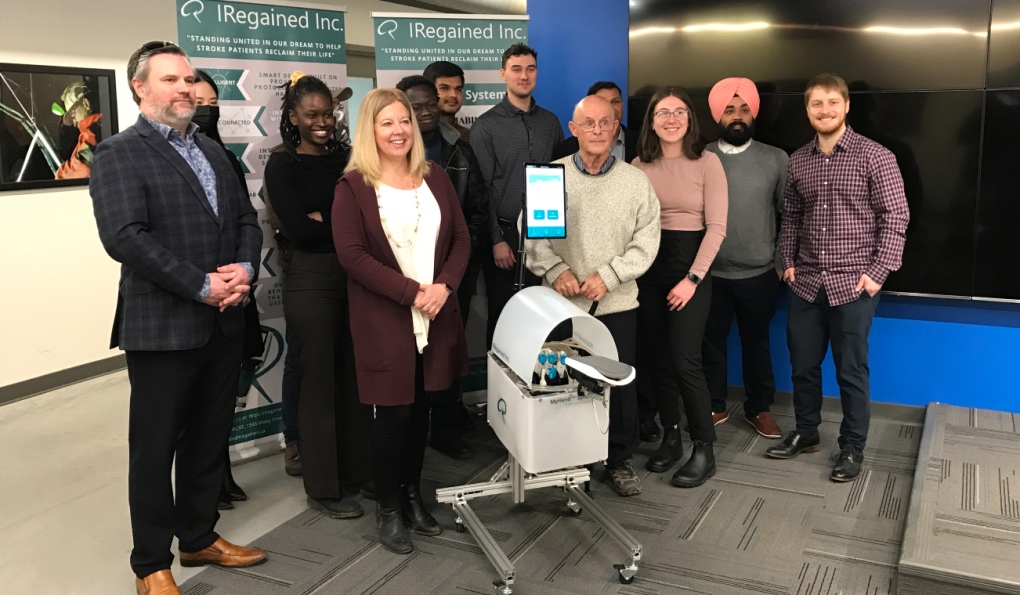 On Thursday morning, Sudbury MP Viviane Lapointe announced more than $500,000 in funding for the company IRegained and its new device, the 'MyHand System.' (Ian Campbell/CTV News)

Users place their fingers in the device that monitors dexterity, while a TV screen puts the patient through challenging tasks and games.

One of those users is David Leblanc, who had a stroke eight years ago. He said the device is going to help a lot of people in the healing process.

"I think the announcement like this is going to make their hearts tickled pink and the fact that they can recognize improvement and regain some of their finger and hand movement," Leblanc said.

"I used to work quite hard on my improvement but since I started with IRegained, my hand has improved 90 per cent."

"We've worked with dozens of patients now in Sudbury and every single one them has improved," said Eric Dumais, the clinic research lead.

"They're living lives that would have otherwise been impossible. Seeing David come into the office every day and being able to pull the door with his affected hand and to be able to close it for himself, it's just crazy."

Part of the funds will help the company hire a youth intern to help with software programming and automation.

They will also support the development of hand function rehabilitation protocols, software architecture and a graphic user interface.

The announcement is expected to create a total of 17 jobs.

U.K. Prime Minister Boris Johnson has agreed to resign, his office said Thursday, ending an unprecedented political crisis over his future that has paralyzed Britain's government.

Feds intend to keep ArriveCan for its data on COVID-19-positive travellers: sources

Brittney Griner trial in Russia resumes amid calls for U.S. to strike deal

Jailed American basketball star Brittney Griner returns to a Russian court on Thursday amid a growing chorus of calls for Washington to do more to secure her release nearly five months after she was arrested on drug charges.

Patrick Brown to remain on Conservative leadership ballots despite disqualification

Despite being disqualified by the Conservative Party of Canada from becoming its next leader, ousted candidate Patrick Brown's name will still appear on the ballot.

First Nations art, from hand-carved masks to totem poles, draws on generations of tradition and skill and can take months to craft. But a flood of fakes and commercial knock-offs produced in Asia and eastern Europe are exploiting Indigenous culture, the artists say, and robbing them of revenue.