The North Bay Police Services colour party piped in the 10 council members and mayor before they were sworn in. 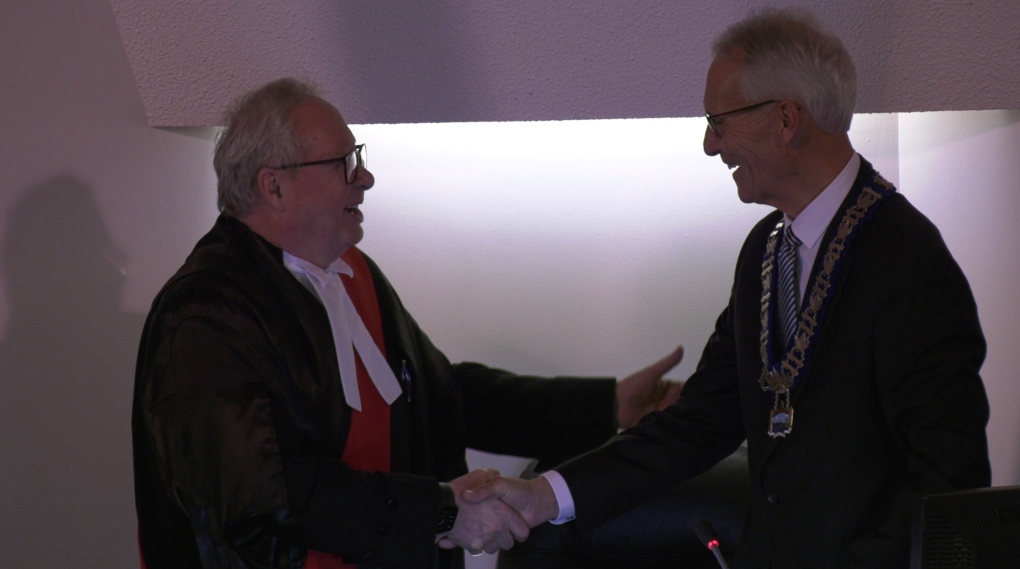 Peter Chirico becomes the 45th mayor of North Bay, after previously serving as a deputy mayor and the president and CEO of the North Bay and District Chamber of Commerce. Nov. 15/22 (Eric Taschner/CTV Northern Ontario)

Peter Chirico becomes the 45th mayor of North Bay, after previously serving as a deputy mayor and the president and CEO of the North Bay and District Chamber of Commerce.

Maggie Horsfield, a political newcomer, will serve as the new deputy mayor for the next four years. She received the most votes of any council candidate on election night.

"We’ve got some extremely enthusiastic people that are now new on council along with our veterans, who have been at council for a number of years," Chirico told reporters after the meeting.

"I think that it’s a great mix. They’re excited. They want to do things and they want to make change happen."

Chirico took time to praise previous councils for their work and dedication, even if he didn’t agree with what certain council members stood for.

"These people have worked tirelessly for the citizens of North Bay. Sometimes, I didn’t always agree with their items," he said.

"I want to acknowledge the momentum they started that we will be able to carry forward as a council."

The first order of business for this council term, Chirico said, is to find ways to tackle mental health, addictions and homelessness while restoring public trust and transparency in council.

"I'd expect that we'll set up a special task force on various different issues and bring together the expertise on council to be able to lead that and so we can be able to say to our citizens at the end of this term that 'we accomplished this,'" he said.

"My job is to lead this council."

Chirico pledges to look at ways to make changes on how to listen to public feedback and said that will be the main priority of this council term.

He also said he spoke with former Mayor McDonald two days ago to pass on his gratitude. He said McDonald wished him well.

"My door is always open to him," Chirico said.

Read more about how municipal governments work in Ontario here.

CTV News spoke with some outgoing and former politicians in northeastern Ontario. Here is what they learned from their time in office.

Cannabis company Canopy Growth to lay off 800, close and consolidate some facilities

Canopy Growth Corp. will lay off 800 workers as part of a transformation plan that will see the company close its hallmark 1 Hershey facility and consolidate some of its cultivation operations.