'The most Canadian thing I've ever seen' takes a dark turn

It can either be a spectacular or very terrifying sight to see a moose alongside a highway as the majestic creatures often cause deadly crashes, especially in northern Ontario. And recently police had to make a difficult choice after a stubborn moose refused to leave a busy highway.

The Nipissing West detachment of the Ontario Provincial Police was notified about a traffic hazard at 8:11 a.m. Oct. 2 involving a moose that was approaching vehicles on the highway causing a public safety concern, OPP Const. Rob Lewis told CTV News in an email.

Bailey Badgerow told CTV News she and her family were travelling down to a popular Christmas-themed amusement park in Bracebridge that morning when they saw a moose trotting beside a provincial police cruiser down Highway 69 south of Sudbury. 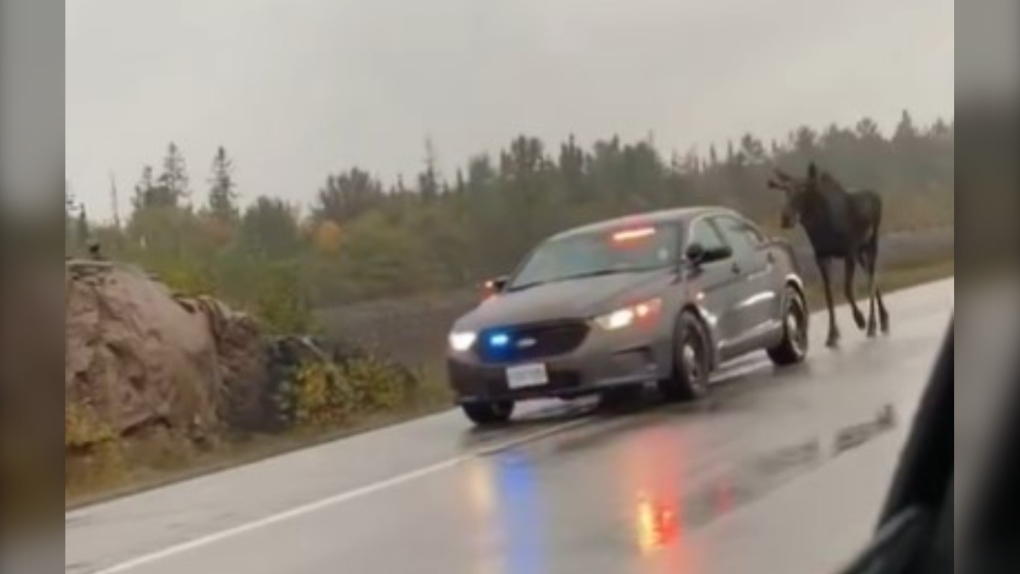 Badgerow, of Espanola, said when they saw the flashing police lights, they thought there might be an accident, and the southbound traffic stopped for a minute. When the traffic started flowing again slowly, they saw what looked like a moose getting a police escort down the highway. 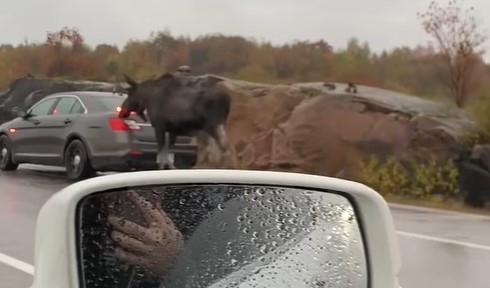 OPP said officers tried to get a moose off the road in Burwash as it was endangering motorists. Oct 2/21 (Bailey Badgerow)

"It was the most Canadian thing I've ever seen. (The police car) literally looked like it had a leash on (the moose) and it was just following along," she told CTV News. 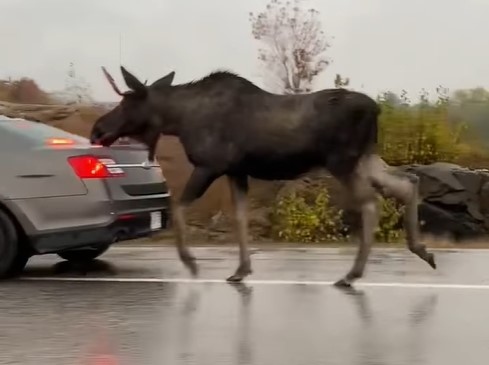 She said her family was excited to see a moose so close up as they had only seen one once before in a remote part of the bush.

"It was definitely a sight to see," Badgerow said.

She captured the sight on video and as of Wednesday afternoon, the video has over 350,000 views on YouTube after being picked up by a video monetization service.

She said she hasn't seen any money yet from the licensing of her video.

Lewis also said OPP and members of the Ministry of Natural Resources and Forestry (MNRF) responded to an animal complaint on Sept. 30 concerning an aggressive moose on Secord Road in Burwash Township, south of Greater Sudbury.

"The moose was charging its head, both into a motor vehicle and a seasonal residence causing property damage and safety concerns to the public.," Lewis said. "The MNRF attended and was able to scare the animal away from the property rather than dispatching the animal."

So two days later, when police got the call about the moose on the highway in the same area, it was believed to be the same animal.

"OPP attended the area and used all known methods to remove the animal off a major highway. However, the animal remained on the highway creating a dangerous situation (for) motorists. Due to public safety concerns the animal, unfortunately, had to be dispatched," Lewis said.

Former U.S. President Donald Trump has paid the US$110,000 in fines he racked up after being held in contempt of court for being slow to respond to a civil subpoena issued by New York's attorney general.

A 12-year-old Ottawa boy is sharing his story after a magnet fishing trip turned up an unexpected find.

The cooling housing market has left some buyers with mortgages that can't cover the full cost of their home following an appraisal. Toronto-based mortgage broker Mary Sialtsis discusses what options these buyers have.