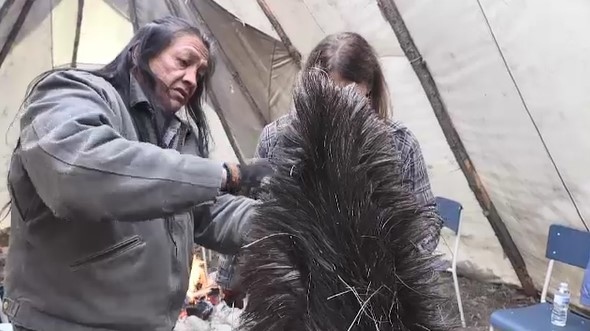 TIMMINS – Interest in Indigenous culture is increasing, from awareness of traditional methods of learning and healing, to a resurgence in native survival skills.

In Timmins, a Cree man is giving the community an opportunity to learn more about one of those skills.

Brian Hunter says making moose hides is a survival skill many Indigenous people lost when they were taken away to residential schools.

"Look at an average Native today, they won't even know how to set up a trap let alone make hides or go hunting… and with me, I was one of the very lucky people to live off the land and pick up all this traditional knowledge," explained Hunter.

When he grew up in Peawanuk, he says men went hunting and women took care of the hides, but that it is not like that anymore.

"Since most of the women don't know how to do it, I'm teaching women to learn the skill so they can pass it on to their kids," says Hunter.

"There's been a lot of interest in land based learning, land based healing, and these opportunities are coming up in Timmins in all kinds of ways, and this is one of them," said Mary Jordan, Ontario Native Women's Association.

"I'm new to this as well, so for me, it's relearning the culture in itself," added Anne Iserhoff, Ontario Native Women's Association.

Hunter says he knows only about 20 people within the Mushkegowuk Territory who have this skill.

"So I made it my mission to bring this back," said Hunter.

He adds that he'll teach anyone who wants to learn in order to keep the skill alive.

Those learning include Brenda Beaven, who is non-Indigenous but says "this brings to me just a better understanding of what has been taken away from them and how it needs to be brought back."

Northern College Indigenous Student Advisor Joe Nakogee commented that he "grew up with moccasins and moose hide mitts, but I never knew how they got like that… it's nice to see. It's a lot of hard work… wow, we really survived all these years."

Hunter says it takes four seasons to make a quality hide and adds that the demand for them is high, selling at approximately $2000.