An investigation is underway in North Bay after nearly a dozen newborn puppies were found near a dumpster.

Now, the local humane society is stressing the importance of seeking assistance if you find your animal is pregnant and you are unable to take care of it.

Staff at the North Bay Humane Society says they were startled to see the one-day-old puppies with their umbilical cords still attached and abandoned near a dumpster in the Thibeault Terrace area of North Bay.

"Seeing this, it's very, very frustrating. We've got a surrender program through the humane society, so there is no excuse for something like this to happen," said Janet Bredin, the shelter manager.

She says early Monday morning; the puppies were dropped off at the humane society's door step by the person who found them. The shelter manager says if they were found any later, they likely wouldn't have made it.

Now, the shelter is doing all it can to save them. 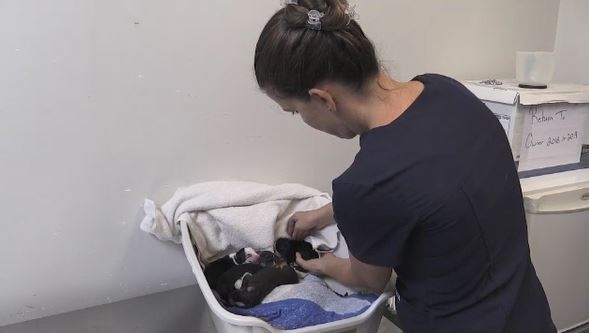 "Because there were 11, we are absolutely desperate to find multiple nursing moms because we don't have the option of putting all 11 likely into one home. They're going to have pups of their own they're not going to have the ability to supplement care for all of the 11 in addition to what they have already got in their home. So, it's very important that if people have something to offer, that they step up if they are able," said Bredin.

Though the shelter does have a surrender fee, it says to avoid situations like this, that fee could be waved.

"In a situation where you're unavailable or unable to take care of your animals, then we don't charge that fee," said Liam Cullen, of NBHS.

Since the shelter put out a call for help Monday afternoon, it says it has been inundated with hundreds of calls from people looking to help.

"Working at the humane society, unfortunately you do see some of the dark side of human nature, but it's also overshadowed ten times more just by the good in people who are willing to help out," said Cullen.

Investigations into these types of incidents are now handled by the Ontario Solicitor General's office.

CTV News put in a call, and while no one was available for an interview, the office did say it is taking this investigation very seriously.