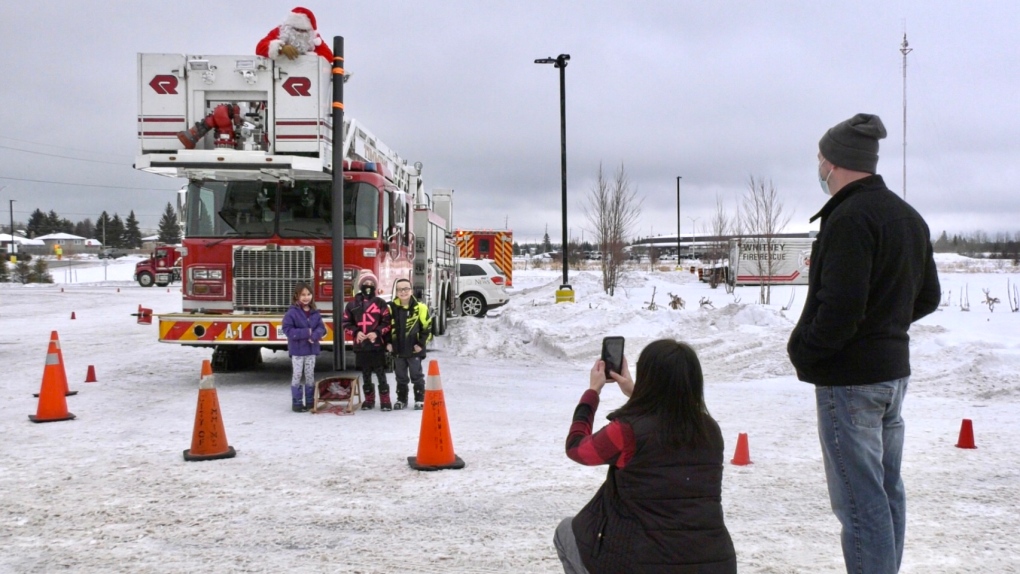 Whitney Fire Station volunteer firefighters who work in the east end of Timmins served their community in a different way today by putting food on the plate-so to speak-at the South Porcupine Food Bank. They held their annual Christmas food drive, but it was organized differently this year due to the COVID-19 pandemic. Dec.20/20 (Lydia Chubak/CTV News Northern Ontario)

TIMMINS -- Weather has never prevented Timmins firefighters from the Whitney Station from getting their annual ‘Candy Run & Food Drive’ done.

It traditionally takes place on the last Sunday before Christmas.

Volunteer firefighter, Montana Marchiori, remembers the event when she was a child.

"Myself as a kid, I was always scared of the clowns so my parents would have to force me down, but no, it was always nice to see them coming down, we'd bring them the food donations," she said.

This year, due to COVID-19, the event had to be organized differently. A drive-through was set up behind the fire station and volunteers collected donations without people having to get out of their cars.

"The spirit is still there. It's hard to see the smiles, but I know the smiles are there and everybody's happy and having fun with it and pretty steady flow so good community support happening,” said Brian Nankervis, Whitney District Fire Chief.

More than a hundred vehicles drove through and handed off non-perishable and cash donations.

Candy canes and photos with Santa Claus—from a distance—were the rewards.

"Well the thing is there's a lot of the people in the community that can't really get out and do the things they usually do,” said Joel Chaput, one of the people who came out to donate with his family.

“And at this time of the year, the support is greatly appreciated so that's why we come out and help out.”

The crew said more money than food came in this year compared to others and that’s a bonus since the food bank can then buy what they’re missing.

"It's important the community knows that we're out there and everybody gives it their all,” said Nankervis.

“Other than the firefighting and the vehicle rescues, you know, we're good at getting everyone involved and everybody's proud to be serving.”

Organizers said they’ve collected at least a few hundred tonnes of food over the last forty-to-fifty years for the South Porcupine Food Bank.