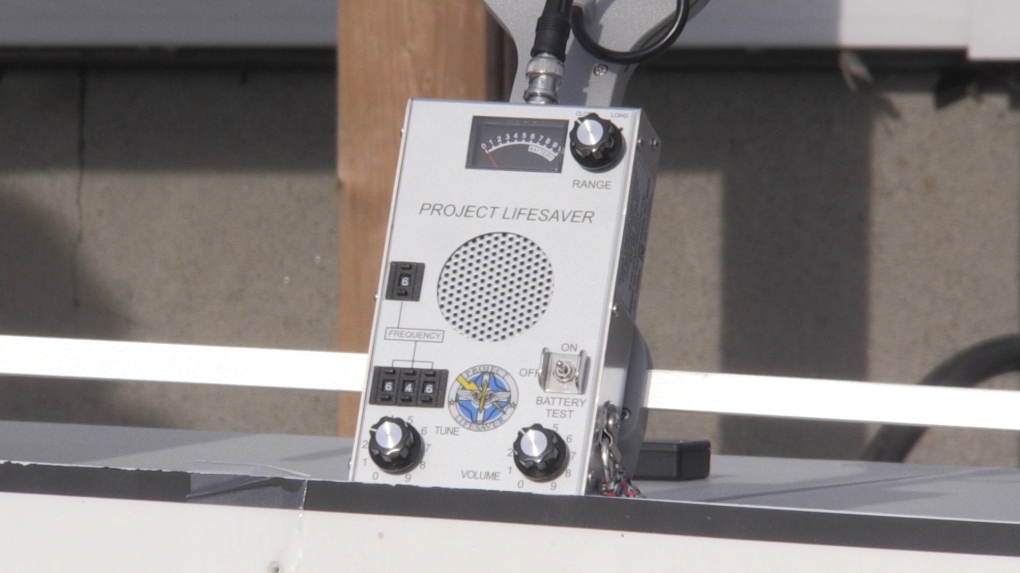 The frequency is recorded in the police data base along with other client information. If the client wanders off, the family can call 9-1-1, where operators will pass on the frequency of the transmitter to trained searchers who can begin the search quickly. Nov.8/20 (Eric Taschner/CTV News Northern Ontario)

NORTH BAY -- When it comes to finding a missing person, time is of the essence.

North Bay's Air Search & Rescue team (BAYSAR) and city police launched 'Project Lifesaver' aimed at helping find people who have a cognitive deficit who are prone to wander off.

"It was the Alzheimer Society that approached BAYSAR and said that 'Here's Project Lifesaver. It would be great if there could be an agency in the North Bay area," said BAYSAR President Stan French.

Clients who are signed up are fitted with a wrist or ankle transmitter. Each transmitter provides a unique radio pulse once per second 24 hours a day.

The frequency is recorded in the police data base along with other client information. If the client wanders off, the family can call 9-1-1, where operators will pass on the frequency of the transmitter to trained searchers who can begin the search quickly.

"We've trained all of our Emergency Response Team members, so that's 12, and we hope to have two in every platoon. That's 20 members trained."

On average, it takes rescuers about 30 minutes to find a missing person enrolled in Project Lifesaver.

BAYSAR is the 23rd agency in Ontario using this program, following in the footsteps of Sudbury and Sault Ste. Marie. Currently nine clients in the city are enrolled.

It's being offered in both North Bay and Callander.

"If need be, we have aircraft that we launch and we can assist and hone from the air," said French.

The first client signed up in September. BAYSAR has 12 trained search specialists to help police in the search.

French says people who will benefit from this the most include people with dementia and children with autism.

"60 per cent of people who are living with dementia at one time through the trajectory of their diagnosis will seek to wander at one point," said Alzheimer Society of Sudbury-Manitoulin North Bay & Districts Executive Director Stephanie Leclair.

"We see it often and we want people to live well with dementia."

Those participating in Project Lifesaver will have a $100 annual lease fee for the transmitter and will have to pay a $100 deposit for the equipment.

When it is no longer needed, the deposit will be returned. There is a $20 monthly fee.

BAYSAR is actively working with the OPP in hopes of expanding the program from West Nipissing to Mattawa and down to Powassan.