Mike Fortin of Timmins has had a rough couple of days. He was coming home during the wee hours of Monday morning after being away for the weekend.

Only three driveways away from his Bonaventure Drive home, Fortin drove through what he thought was a puddle. 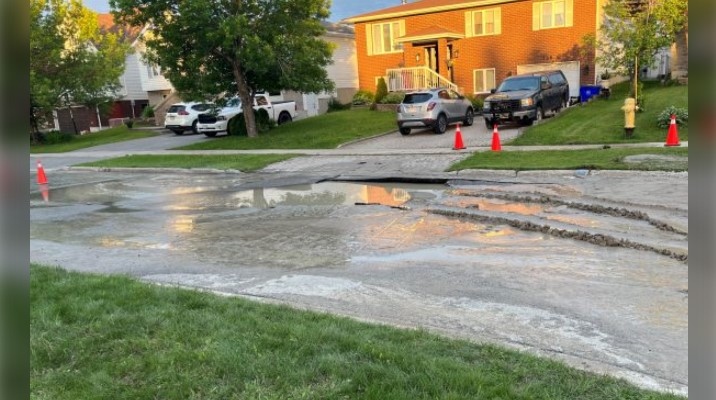 Sinkhole in the daylight on Bonaventure Street in Timmins. June 20/22 (Timmins Police Service)

It wasn't a puddle.

"I turned the corner driving towards my house, the whole front end of the car just ...," he said.

The car plunged, front-end first, into a hole in the asphalt.

Fortin said his car was submerged, killing his engine as water filled his car up to his waist.

Getting a little concerned for his safety, he called 911 and managed to get a window open.

"I put my legs out on the windowsill and I'm feeling around 'cause it’s all water around me," Fortin said.

"I wanted to make sure that I had some ground to step on and even at that I’m hanging on to the edge of the car and I’m feeling around and still wasn’t touching any ground. So, I said, 'I ain’t jumping out cause God knows what will happen then.' I said, 'I don’t know how big this hole is.'"

Officials with the city said the sinkhole was created because a watermain break in the neighbourhood compromised the roadway.

"So when watermain breaks occur, it does, at times, wash out some of the ground material under the asphalt and that's what happened there," said Scott Tam, manager of environmental services and public utilities for the City of Timmins.

"Washed a little bit out, compromised the road and unfortunately, the integrity of the asphalt was very brittle."

"It’s a cautionary tale to be careful in any area that you’re travelling through," said Marc Depatie, communications coordinator for the Timmins Police Service.

"A puddle might not have a bottom to it, so you have to be careful in those circumstances."

"I mean, I saw water, but ... you see puddles and you don’t get out of the car to feel if you can drive through it," said Fortin.

He said he's happy he survived the experience without any serious injuries, but added his car is likely a write-off.

Fortin said he's now looking forward to having a shower since the water has also been shut off in his neighbourhood while city crews repair the watermain.

Air Canada and Toronto's Pearson airport again claimed the top spots for flight delays on Tuesday, marking at least four days in a row where the country's biggest airline has placed No. 1 of any large carrier worldwide.

Canada's immigration department is restarting all Express Entry draws for immigration applications Wednesday, after pausing the program 18 months ago during the pandemic.

Emergency room delays to continue for 'quite some time,' doctor warns

An emergency room physician is urging governments to address the country’s shortfall of health-care workers in light of the recent temporary shutdowns of emergency departments and the staffing downsizing at others.

A high school friend of B.C. teen Amanda Todd has testified he took action when he saw what he described as a 'pornographic' picture of her on Facebook in November 2011.

Boy, 2, orphaned after both parents killed in Fourth of July parade shooting

Kevin McCarthy, 37, and Irina McCarthy, 35, the parents of a two-year-old boy, were among seven people killed in the Chicago-area mass shooting on July 4.

Australian authorities have charged 12 members of a religious group with the alleged murder of an 8-year-old girl, police said in a statement Tuesday.