Fire officials in North Bay will not be able to determine the cause of the large fire that burned two buildings down on Friday.

"We won't be able to determine a cause. The damage is too extensive," said North Bay Deputy Fire Chief Greg Saunders. "The Fire Marshal will not be called in."

The fire was deemed suspicious by officials but Saunders says there will be no way to tell what exactly caused the two buildings to go up in flames. 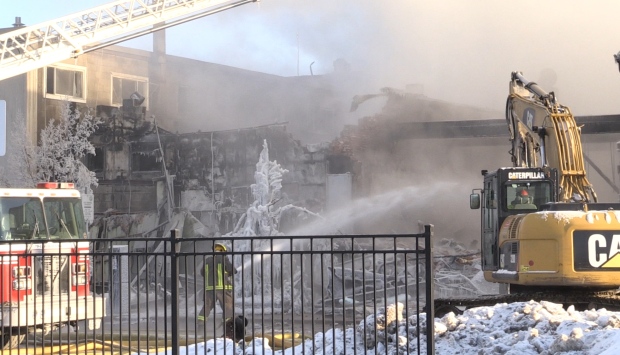 Crews had to fight the fire on both the back of the building on Oak Street and also the front on Main Street.

The massive blaze was finally extinguished after 9 a.m. Friday morning but crews continued throughout the day putting water on some of the hot spots. An excavator was also called in to knock the buildings down, leaving a gaping hole on Main Street.

Saunders adds that the extreme cold temperatures played a huge roll in why it took crews so long to douse the flames. No one was in either of the buildings at the time of the fire, but one firefighter was taken to hospital with frostbite injuries to his legs.

A damage estimate remains unknown at this time.

Fire officials say the blaze that broke out overnight in downtown North Bay is now being deemed suspicious.

"We're going to continue working on the hot spots. We're waiting for the Fire Marshal's Office to come in and we'll begin the investigation with the Fire Marshal," said North Bay Fire Chief Jason Whiteley.

Main Street and Oak Street remain closed between Ferguson and Wyld Street, the public is asked to avoid the area.

One firefighter has been taken to hospital with frostbite to his legs.

The blaze has destroyed two empty buildings as well as the home of Literacy Nipissing. The downtown Nurse-led Practitioner Clinic and the offices of Nipissing MPP Vic Fedeli sustained damage, and six people have been displaced.

Nipissing MPP Vic Fedeli says his constituency office has been affected by the fire, having received smoke and water damage.As a result, Fedeli says his office will be closed until the New Year.

"Our office will be closed at least until the New Year, until we can assess what we're going to do on an ongoing basis," said Fedeli.

Vandra McQuarrie is the executive director of Literacy Nipissing, one of the businesses affected by today's fire.  McQuarrie says the organization is devastated, as they had just moved into the building in April.

"I want to reassure any of the students that out learning will not stop in the New Year," said McQuarrie.North Bay Transit has opened up its building to house displaced people.

No one was in either of the buildings when the fire began.

City officials say power has been restored to all areas downtown, except the buildings directly affected by the blaze. They also say parking enforcement has been suspended for the day and tickets will not be issued, as long as vehicles are not parked in handicapped or loading zones.

An excavator begins to tear down the remaining walls of the two buildings destroyed. A gaping hole will soon be all that’s left. @CTVNewsNorthern #NorthBay pic.twitter.com/IYfFHNJADi 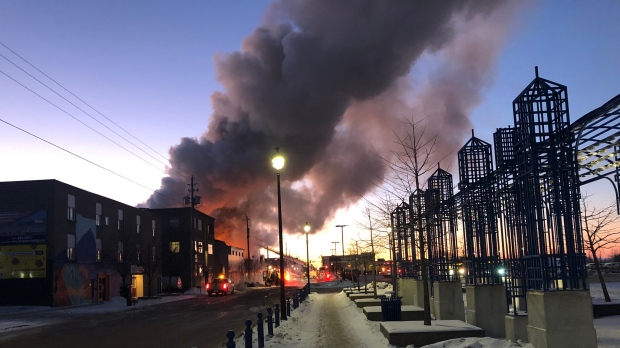 As the sun rises in North Bay Friday morning, smoke billows throughout the city due to a massive fire in the downtown core.

Fire officials were called to Main Street and Oak Street around 12:30 a.m. and crews began to tackle the flames on the Oak Street side as quickly as they could.

"We tried to do an interior attack, but it quickly pushed out, so we went to a defensive attack," says North Bay Fire Chief Jason Whiteley. "We’ve made a stop on the west side of it at the Fedeli building."

Whiteley says five businesses within two buildings have been affects, including a hair salon.

No one was injured in the fire, but damage is extensive.

Whiteley expects firefighters will be on scene for a large portion of the day.

"The fire moved to the next building, but we’re trying to keep the fire at bay at the Cedar Tree Restaurant," said Whiteley.

Fire crews brought in an excavator to help to knock down the burned-out building and to help stop the spread of flames.

Whiteley says the cold weather has caused major problems as equipment has started to freeze up.

"We had two smoke explosions on the Oak Street side and the back draft went on the Main Street side," says Whiteley.

There’s no word at this time on a cause.

CTV News will update you as more information becomes available.

Main Street and Oak Street are closed while fire fighters work to control the blaze.

Fire officials are asking people to avoid the area.

CTV Northern Ontario's Eric Taschner is on the scene and will have more details shortly.