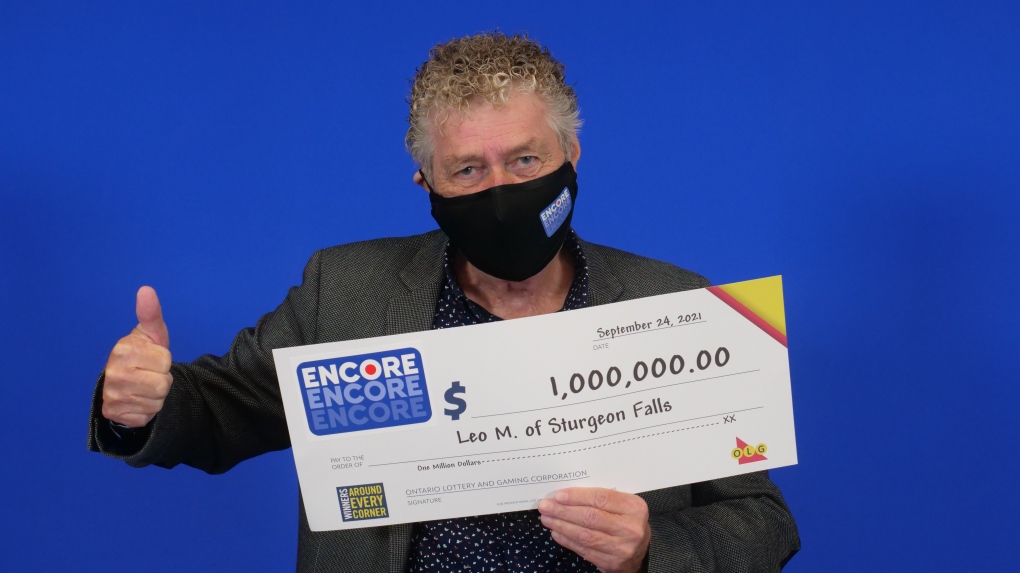 Lightning has struck twice for a northern Ontario man who has recently won his second big Encore lottery prize, the Ontario Lottery and Gaming Corporation (OLG) said in a news release.

Leo Malette, a 76-year-old from Sturgeon Falls, matched all seven Encore numbers in the exact order in the Aug. 26 Daily Grand draw winning $1 million. And it is not the first time he has won playing the bonus lottery game.

The city councillor for West Nipissing is a regular lottery player who said he always adds Encore to his tickets. It is a bonus game that costs an extra $1 but gives the ticket holder access to additional prizes in conjunction with nine other OLG games.

He found out about his good fortune by checking his tickets online.

"I didn't believe it was real," Malette said. "I waited about an hour for my wife to wake up so I could tell her the good news. I started calling the kids and they were so shocked and happy for us!"

He has purchased a new car with his winnings and is enjoying a family trip in Toronto while picking up his prize. Malette plans to share the money with the three generations in his family saying "this is a family win. My family is my whole world."

The winning ticket was purchased at the Metro grocery store on Front Street in Sturgeon Falls.

Saddle Lake Cree Nation in eastern Alberta is 'actively researching and investigating' the deaths of at least 200 residential school children who never came home, as remains are being found in unmarked grave sites.

Ukrainian fighters extracted from the last bastion of resistance in Mariupol were taken to a former penal colony in enemy-controlled territory, and a top military official hoped they could be exchanged for Russian prisoners of war. But a Moscow lawmaker said they should be brought to 'justice.'

The Green Party of Canada is calling on the federal government to develop a targeted anti-transgender hate strategy, citing a 'rising tide of hate' both in Canada and abroad. Amita Kuttner, who is Canada's first transgender federal party leader, made the call during a press conference on Parliament Hill on Tuesday.

Former Pentagon officials have briefed at least three Canadian members of Parliament about unidentified flying objects, according to a Manitoba MP and a Texas-based researcher.

Conservative Party leadership candidate Pierre Poilievre has a personal financial interest in cryptocurrencies that he has promoted during his campaign as a hedge against inflation.

Alberta Premier Jason Kenney is urging the U.S. government to convince Michigan to abandon its legal campaign against the Line 5 pipeline.

International arrivals at Canadian airports are so backed up, people are being kept on planes for over an hour after they land because there isn't physically enough space to hold the lineups of travellers, says the Canadian Airports Council.