TIMMINS -- Carol Patriquin was alone in her Timmins home Sunday night, when she heard her two dogs barking wildly outside. To her surprise, she saw her German Shepherd and Bearded Collie tied to their leashes — and in front of them, a growling wolf circling the dogs.

Patriquin said her brain shut off, and she could only think about yanking her dogs inside and firing a loud bear-repellent to scare off the animal.

“Nothing like that has ever happened here before, I wasn’t prepared for it,” Patriquin said. “Usually if it’s a coyote, they’ll just take off with the dogs barking, but not this thing.”

Patriquin lives by a forested area and often sees shy animals passing by and keeps spotlights on at night to keep them away. 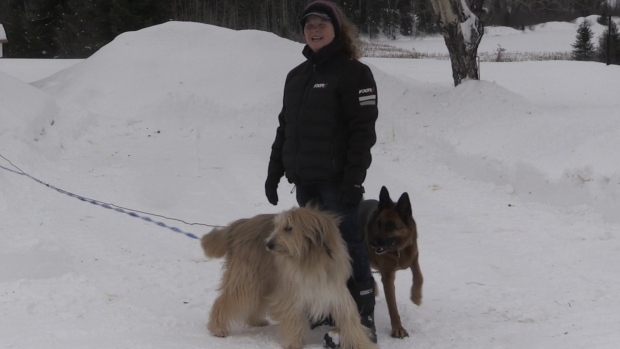 The Ministry of Natural Resources and Forestry said it’s receiving more reports lately of wolves venturing into residential areas in the east end of Timmins.

The ministry’s Timmins district said many reports came from the South Porcupine area, adding, the change in behaviour is strange for how wolves typically act in human-populated environments.

“Some of the stuff we’ve been hearing is that they’re ... more bold and less shy than usual,” said Kevin Kilgour, management biologist at the ministry. “It’s unclear why they’re doing this.”

Kilgour said the cause for the behaviour shift could be anything from starvation to disease, but without a wolf to test and analyze, he said it’s hard to tell.

The ministry’s main concern, however, is the safety of pets and children who may roam outside while wolves snoop around, enticed by the smell of exposed garbage or pet food.

Kilgour said keeping trash in a garage and pet food inside will avoid triggering a wolf’s sense of smell.

“You can also use motion-sensing lighting, which is a good deterrent against wolves,” said Kilgour.

If you do encounter a wolf, Kilgour advises to approach the situation as you would any wild animal.

His advice is to: