Ontario Premier Doug Ford was in Sudbury, Ont. on Thursday for the grand opening of Vale's Copper Cliff Complex South Mine expansion as Phase 1 has been completed on the $945 million project.

The project will enhancie the company's supply of low carbon nickel and other critical minerals.

"Connecting our northern Ontario mineral resources with Southern Ontario's manufacturing excellence the technology that will power our future depends on battery minerals like nickel and copper," said Ford addressing the crowd.

It's a revamped mine that is nearly a 1-billion dollar investment by Vale that will create 270 new jobs. The company said the mine was closed in 2009 due to unfavourable economic conditions.

"As part of our longer term planning processes we keep a close watch on all of ore bodies obviously and the economics changed we are bringing it back on line," said Gord Gilpin, head of Ontario operations for Vale.

Everyone in attendance donned bright orange, hi-visibility safety coveralls for the event that included an underground mine experience and mural unveiling. 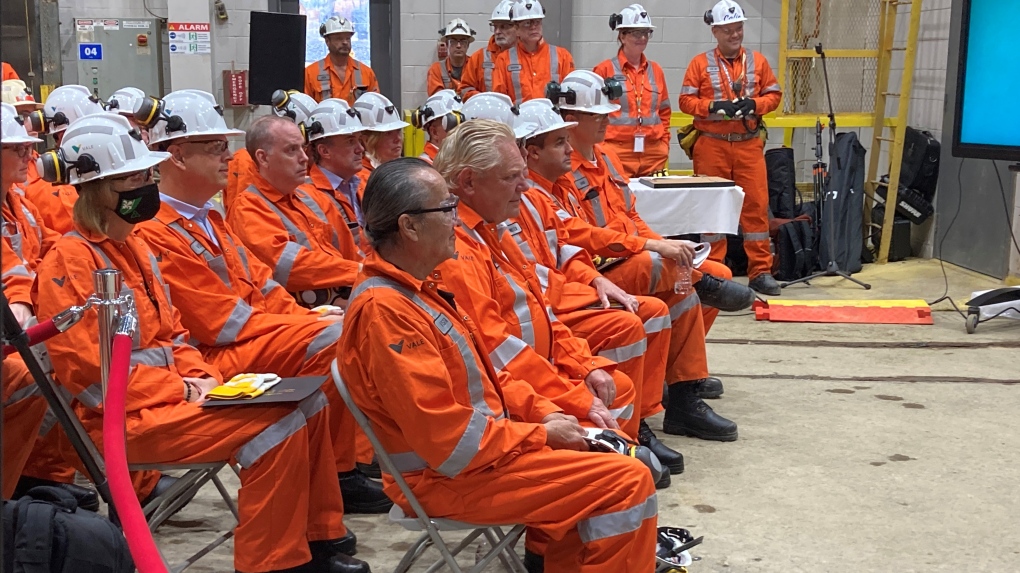 Doug Ford and other dignitaries are in Sudbury for the grand opening of Phase 1 of Vale's Copper Cliff Complex South Mine. Oct. 13/22 (Alana Everson/CTV Northern Ontario)

Both area MP and MPPs were also in attendance with the Ontario Minister of Mines George Pirie and Sagamok Anishnawbek First Nation Gimaa (Chief) Angus Toulouse.

Pirie said the revamped mine will help to meet needs now and into the future.

"The current needs means we are developing the electric vehicle technology. We are decarbonizing our society and a big part of that is in fact it can't happen without mining," explained Pirie.

Officials with Vale added the project will see the development of approximately 10 million tonnes of ore delivering 14 years of production over its lifetime.

Tune in as I attend the opening of the Vale Copper Cliff Mine in @GreaterSudbury with @GeorgePirieMPP. https://t.co/XLZmGO9eGG

A previous version of the article indicated that the project cost was $760 million.

WHO emergency declaration call based on virus spread and variants, Dr. Bogoch explains

The World Health Organization (WHO) is set to decide Friday, whether the COVID-19 pandemic still qualifies for an international emergency declaration title— a decision that will involve factoring in how the virus and its variants are impacting countries around the world, says an infectious disease expert.

Thousands of Maritimers still without power after Thursday storm

Thursday’s wet and windy storm has knocked out power to thousands of people in the Maritimes, most of which are in Nova Scotia.

Newly discovered asteroid makes one of the closest approaches of Earth

An asteroid the size of a box truck made one of the closest passes of planet Earth ever recorded.

Memphis braces for release of video in Tyre Nichols' arrest

The city of Memphis and the nation on Friday awaited the release of a police video depicting five officers viciously beating Tyre Nichols, a Black man whose death prompted murder charges against the cops and outrage at the country's latest instance of police brutality.

U.S. Rep. George Santos' campaign committee told federal regulators Wednesday that it had hired a new treasurer amid lingering questions about the source of his wealth and irregularities in the committee's financial reports.

The immersive, slow-burn experience viewers get from 'Skinamarink' is the antithesis of seconds-long videos seen on TikTok, a platform that helped create buzz for the low-budget Canadian horror film months before its release.