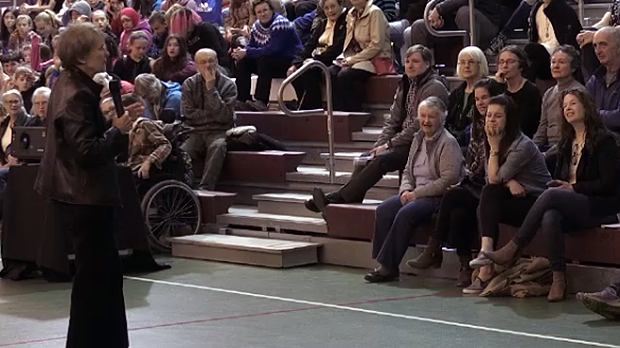 Roberta Bondar was back in her hometown on Tuesday to help launch the third annual Sault Ste. Marie Science Festival.

“What does it feel like to be in micro-gravity?” asked one young student.

That is just one of many questions Bondar answered about her career as an astronaut and scientist.

She said her goal is to inspire youth to ask questions.

“It never hurts to show them you can be passionate as a scientist,” said Bondar.

“A lot of time people think that it's a disembodied type of knowledge that they get. It’s also very practical knowledge. It’s stuff that will make them really strong and make them into very informed citizens of the country, so I think that's really good. I just want to get them inspired to ask questions and maybe the next time they think about mars they will think about some of the things I showed them today.”

Science North and The Roberta Bondar Foundation have formed a new partnership to celebrate the 25th anniversary of Bondar’s historic space travel with Earth Matters; a multi-city series of guest appearances throughout northern Ontario focused on the trailblazing astronaut’s love for this planet.

Bondar’s tour of the north has additional stops in Sudbury, North Bay, Timmins, Manitoulin Island, Kenora and Thunder Bay. The dates will be confirmed in the coming weeks.

The Ontario150 Bondar Challenge invites people to take photographs of an aspect of nature in their own community that they admire and hope will still exist 150 years from now.

Participants will be asked to submit their photographs along with a brief description of why what they have captured is meaningful.