They gathered in support of Creator's Choice Co-owner Derek Roque, who company officials say was arrested on the reserve for breaching bail conditions to not attend his business. He is scheduled to appear in bail court Thursday afternoon.

The supporters say the Wahnapitae First Nation stores should be allowed to operate and feel the police and the Ontario government should not have jurisdiction on their land.

"This should not have happened. We have our own laws in our own community and we’ve been starting to work with the dispensaries in our community and we’ve drafted our own bylaws and laws and we’re looking for respect for that. And we see that that’s not happening. There has to be, we have own jurisdiction over this. The province should have nothing to do with this, said Ted Roque, a Wahnapitae First Nation band councillor.

"We’ve been robbed three times. It's devastating to the business, and not just the business, I mean, you got to think what our business is. We’re a medicinal cannabis dispensary. We’re not a pot shop," said Nicola Roque, Derek's wife.

This all comes after members of Wahnapitae First Nation voted in favour of approving the sale of cannabis on its territory this summer. However, shortly after the vote, the chief and council published by-laws prohibiting sales not regulated by Health Canada.

CTV News has also reached out to the chief and council for Wahnapitae First Nation for comment as well.

Creator's Choice released this statement on their Facebook page in response to Wednesday's raids:

"In a surprise move by Anishinabek Police Services (APS), two dispensaries in Wahnapitae – Creator’s Choice and First Nations Medicinal were raided at 12:10pm today by a force of over a dozen police cruisers bearing the APS insignia. According to APS Police Chief Marc Lesage, the APS did not receive a request from Chief and Council of Wahnapitae First Nation to conduct the raids, but acted on their own behalf to unilaterally enforce the Federal Cannabis Act on Indigenous lands.

Police Chief Lesage further indicated that he was unaware of the decision made by the Chiefs of Ontario in June of 2019 to assert “complete jurisdiction” to govern all cannabis operations within First Nation territories. Lesage also stated in a phone interview that he did not know that the members of Wahnapitae First Nation voted in a referendum on June 29th 2019 to legalize sales of cannabis in their territory, and that he did not know that Chief and Council had passed an interim cannabis bylaw to regulate the industry on reserve.

On Monday, Chief and Council, community members, and representatives from both dispensaries held a three hour meeting to discuss the cannabis laws on the Territory. According to those present, the meeting went well and all parties committed to working together to improve the community’s cannabis bylaws. Police Chief Lesage said he was also unaware that this meeting had occurred.

According to a Wahnapitae band member who was present, Chief Larry Roque spoke with APS police officers during the raid and told them to stop the raid and not to take products from the stores. The Chief informed the police that regulations had already been put in place to govern the cannabis industry in Wahnapitae. The APS refused to take direction from the Chief and proceeded to empty the dispensaries of their products, even going so far as to remove the ATMs.

Creator’s Choice owner Derek Roque was arrested by APS officers while driving past his store on the main road. An officer claimed that he had previously witnessed Roque inside his dispensary in breach of conditions imposed from a previous raid. Those charges have not yet gone to trial, and Roque claims that his provision of medicinal cannabis on Wahnapitae territory is protected by his treaty rights under Section 35 of the Canadian Constitution.

Two workers at First Nations Medicinal were escorted off the premises by police and made to sign conditions that they will no longer work in an “illegal” dispensary.

Representatives of Creator’s Choice are calling on all supporters and friends of the store to attend the bail hearing for Derek Roque at 9am on Thursday, September 19th at the Sudbury Courthouse at 155 Elm St, Sudbury. Managers of Creator’s Choice and First Nations Medicinal have indicated that they will be open for business tomorrow as per usual. Further updates will be available on the store’s websites and social media." 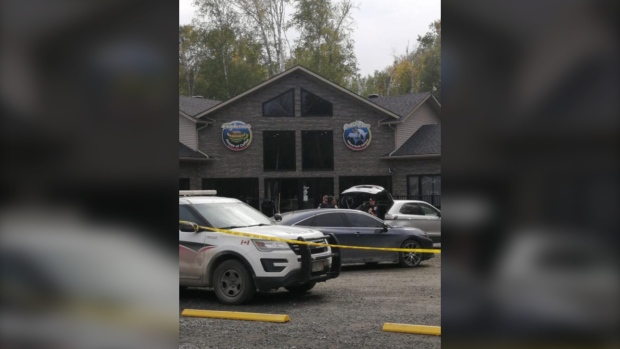 First Nations Medicinal posted on Facebook that their store, located north of Sudbury, was being raided Wednesday.

Officials with Creator's Choice Natural Health Solutions say a dozen APS cruisers were involved in the raid and that one of the owners of the store has been arrested for breaching conditions of his bail, including attending his property and store.

The Ontario government announced the second allocation of cannabis retail store authorizations in July, which included eight licences for stores to be operated on First Nations reserves. Neither of these stores currently have a licence through the Alcohol and Gaming Commission of Ontario.

OPP say they will continue to lead an enforcement strategy that focuses on dismantling organized crime groups, eliminating the illegal cannabis supply, remove illegal store fronts and online businesses, and target the proceeds of crime and assets along with other Ontario police services.