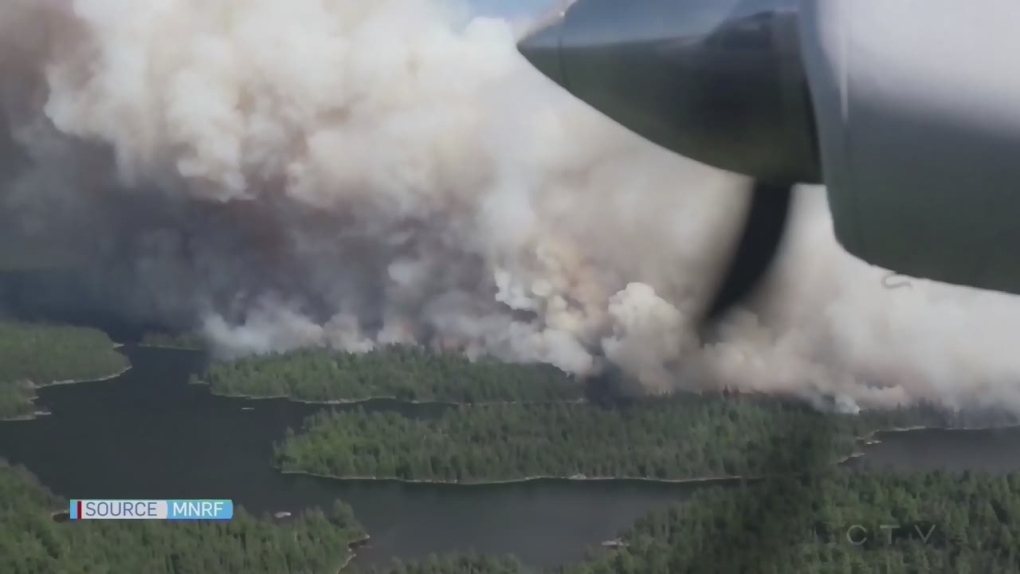 While fire crews have now got the Temagami blaze under control, the previous evacuation order has been lifted.

As of Wednesday, 17 new starts have been reported, including 12 new active forest fires in the Cochrane and five in Pembroke.

The MNRF is expecting the 30 hectare fire in Parry Sound to continue creating smoke in the area.

All modes of travel and access in the following closed backcountry parks is prohibited:

Ministry of Natural Resources and Forestry statement in its entirety:Aviation, Forest Fire and Emergency Services

By the evening of July 18, there are 66 active forest fires across the Northeast, of these, 28 are not yet under control, 38 are either being held, under control or being observed.

Today, there were 17 new starts in the region, none of which have been declared out at the time of this update.

Where it had been previously quiet, the Cochrane sector now has twelve active forest fires. Five are being observed to allow the natural benefits of fire on the landscape, there are no values threatened in the area of these fires.

Of note, Cochrane 14 is not yet under control at 400 hectares, it is located west of Tomorrow and Yesterday Lakes. Values protection (sprinklers on structures) is underway and will continue tomorrow as a precautionary measure.

Cochrane 8 covers 85 hectares and is not yet under control at the time of this update. Four crews and aerial fire suppression resources were on scene today, in the form of two CL415 waterbombers, a birddog aircraft and helicopter support.

Of the four new lightning starts in the Pembroke sectors, Pembroke 5 required aerial fire suppression in the form of a bucketing helicopter. It covers 1.5 hectares and is located east of Grant’s Creek Provincial Park.

Incident Management Teams (IMTs) are in place in the region. They are managing priority fires in 3 areas:

·         FireRanger crews are making steady progress on both fires.

·         Due to the recent rainfall and the higher humidity, reduced fire activity continues to aid firefighting efforts on all fires within the cluster. Firefighters were able to call North Bay 53, North Bay 65 and North Bay 93, OUT.

·         North Bay 69, which previously caused the evacuation of twenty homes in the Temagami area, is now under control (UCO). Firefighters, are now focusing on working their way deep into the interior of the fire to check for hot spots.

·         A successful controlled burn was carried out to reduce forest fuels. This strategy will bring the fires edge up to natural boundaries, further reducing the risk of fire spread and eliminating the need for ground crews in that area.

·         Heavy helicopters continued to bucket water onto North Bay 72 today, coordinating with crews on the ground. Fire behaviour was more aggressive today with higher temperatures and lower relative humidity. Crews continue to establish hose line along the east and north perimeter of the fire which is approximately 11 453 hectares.

Resources From Out of Province

·         Parry Sound 33 created a significant amount of smoke along Hwy 69, south of Grundy Lake Provincial Park this evening. Aerial fire suppression and ground crews were on site tonight. It is expected that this 30 hectare fire will continue to create smoke in the area tomorrow.

·         Many Ontario residents have reported smoke drift in their communities. Smoky conditions are expected to continue when fires are active, until weather patterns change.

·         AFFES is reminding the public that if they do see flames or smoke, please report it, and stay away from the area in the interest of public safety.

The Ministry of Natural Resources and Forestry has been advised by the Municipality of Temagami that the evacuation alert has been lifted in Temagami, and that Fire Tower Road as well as the Fire Tower are now open.

·         Please visit Ontario.ca/forestfire as this information is being updated regularly.

·         For up to date information on current fires in the province or to check the forest fire hazard in your area, visit Ontario.ca/forestfire