From hospital, to city landmark, to a book and now an art display, Sudbury’s old General Hospital is part of another new project.

“At some point obviously the mural won’t be there,” said Bernie Hughes of the Sudbury Writers' Guild.

“It will either be covered up or taken down with the building so we also wanted to preserve some of the perspectives that people have and now it’s contained in our book and our poster display.”

In all, 24 posters have been enlarged with pieces from the book and five new additions. 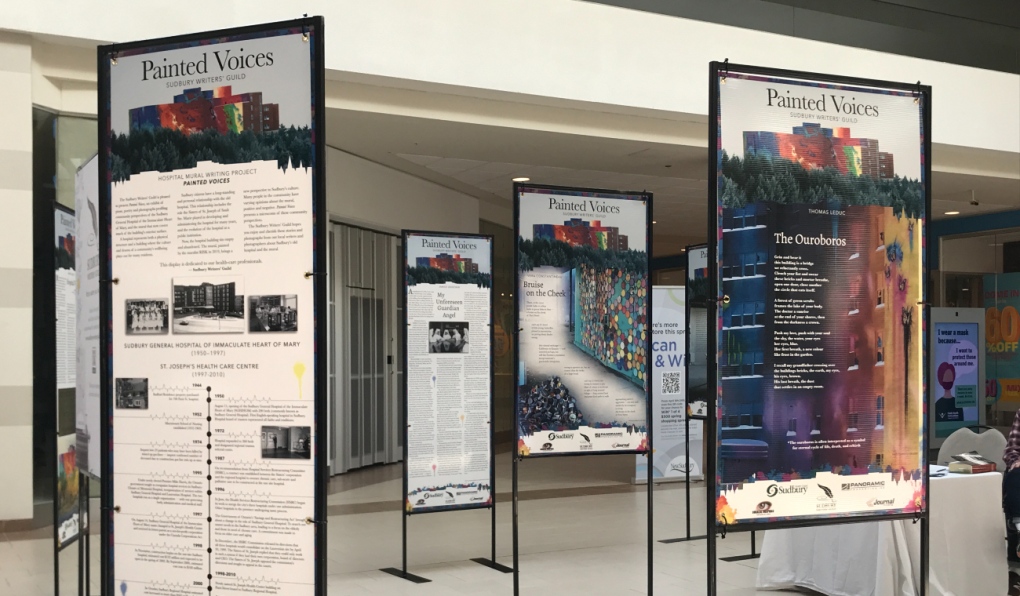 It’s another step in The Sudbury Writer’s Guild Painted Voices project with 24 posters now on display highlighting the history and opinions on the city’s rainbow hospital.

It’s Phase 2 of the Sudbury Writers' Guild Painted Voices project, a chapbook that came out last year featuring a collection of more than 60 poems and stories surrounding the controversial rainbow structure.

“We know that a lot of people have a deep relationship with Sudbury General Hospital,” Hughes said.

“I wrote a piece about my father-in-law, who was Dr. Robin Poole, and he was the founder of the Sudbury Intensive Care Unit at the old Sudbury General Hospital,” said Nancy Daoust, who had two pieces published in the chapbook.

The plan for the 24-poster display is for it to travel around the city for more people to see at another four or five venues. The first stop was at The New Sudbury Centre, where it will stay on display until Sunday.

“I did buy three books for my three granddaughters, they were born there so once they destroy this building,” said Arthemise Camirand-Peterson who was at the display on Wednesday.

“I want them to know where they were born … I think we should all know the history of Sudbury.”

Those involved say the idea was to spark a community conversation and interest in the newest release of Painted Voices Posters.

“This will be an opportunity for more folks in Sudbury to get out and see some of the pieces that were written about the Sudbury General,” said Daoust.

“As well, the posters are just gorgeous. They’re full of photographs of the General back when it was in operation, as well as the way it looks now.”

Hughes said the poster display cost around $2,500 and there was support from the City of Greater Sudbury and Panoramic Properties, which currently owns the building. The Guild contributed funding as well.

“We’ve had a very good reaction from the community,” he said. “People who spent a lot of time perhaps as staff at the old Sudbury General Hospital, people who had been to the hospital for various reasons, they’ve all talked about the chapbook and about this display.”

Officials said the plan is to display the posters city-wide throughout the summer before auctioning them off and donating the proceeds to a local charity.