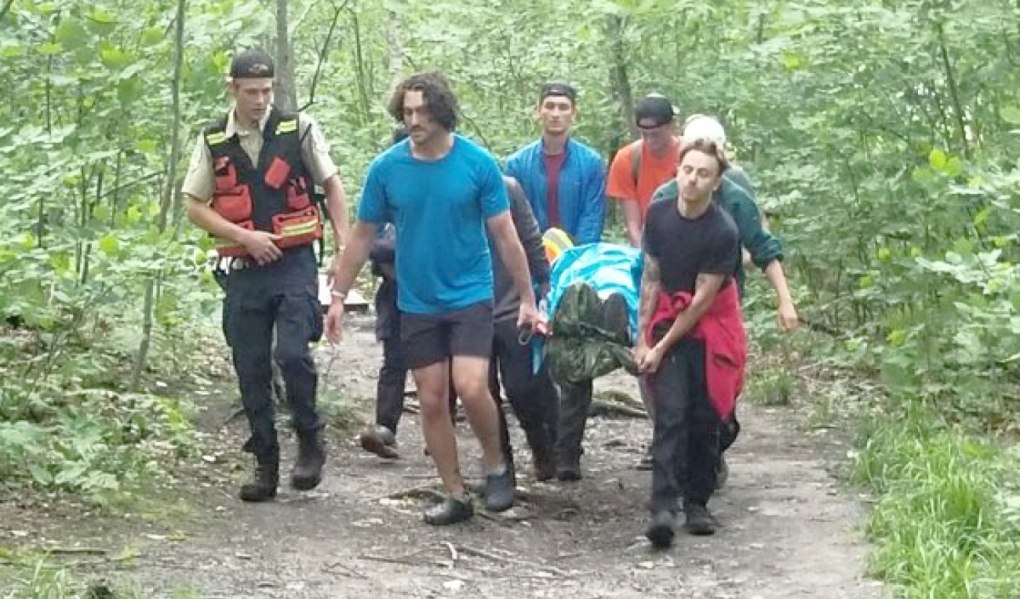 Ontario Provincial Police in Noëlville are thanking a group of nine hikers who carried an injured person through the bush and to a waiting Ornge helicopter. The incident took place July 1 in Killarney Provincial Park. (Supplied)
Sudbury -

Ontario Provincial Police in Noëlville are thanking a group of nine hikers who carried an injured person through the bush and to a waiting Ornge helicopter.

"The injured person activated a Spot Locator Beacon, which provided the Global Positioning System (GPS) co-ordinates to both police and park wardens," police said in a news release Tuesday.

"The individual was located and was suffering from dehydration and heat exhaustion and unable to walk."

An emergency responder, along with two park wardens and nine backcountry hikers used a stretcher to carry the injured person to safety.

"They had to endure a 1.5 kilometres trek through rugged terrain, which included steep inclines and declines, large boulders and swamps," police said.

"The OPP would like to thank the hikers involved. With their assistance, the transportation of the injured person was expedited to the awaiting Ornge air ambulance."

The injured person was flown to the local hospital and treated for dehydration and heat exhaustion, then later discharged.

"The OPP would like to remind the public of the 'what3words' app that is offered for free download for both Android and Apple devices," police said.

"The app labels every three squared metres with a unique three-word location string, which can be converted into latitude and longitude coordinates for entry into the Computer Aided Dispatch system in use at the OPP Provincial Communication Centre."

If the caller does not have the app previously downloaded onto their mobile device, the police communicator can send a link to the caller's cellphone that allows the caller (with data access and connectivity), to find their what3words location.

The app is available in 43 languages, but shares the location in English.

Saddle Lake Cree Nation in eastern Alberta is 'actively researching and investigating' the deaths of at least 200 residential school children who never came home, as remains are being found in unmarked grave sites.

Ukrainian fighters extracted from the last bastion of resistance in Mariupol were taken to a former penal colony in enemy-controlled territory, and a top military official hoped they could be exchanged for Russian prisoners of war. But a Moscow lawmaker said they should be brought to 'justice.'

The Green Party of Canada is calling on the federal government to develop a targeted anti-transgender hate strategy, citing a 'rising tide of hate' both in Canada and abroad. Amita Kuttner, who is Canada's first transgender federal party leader, made the call during a press conference on Parliament Hill on Tuesday.

Former Pentagon officials have briefed at least three Canadian members of Parliament about unidentified flying objects, according to a Manitoba MP and a Texas-based researcher.

Conservative Party leadership candidate Pierre Poilievre has a personal financial interest in cryptocurrencies that he has promoted during his campaign as a hedge against inflation.

Alberta Premier Jason Kenney is urging the U.S. government to convince Michigan to abandon its legal campaign against the Line 5 pipeline.