Plans to return passenger rail service to northeastern Ontario now have a tentative price tag of $75 million, as announced by Premier Doug Ford in Timmins on Sunday.

Joined by transportation minister Caroline Mulroney, Ford said the plan is now to look into the feasibility of building 16 stops from Timmins to Toronto, including a newly-announced rail extension to Cochrane. 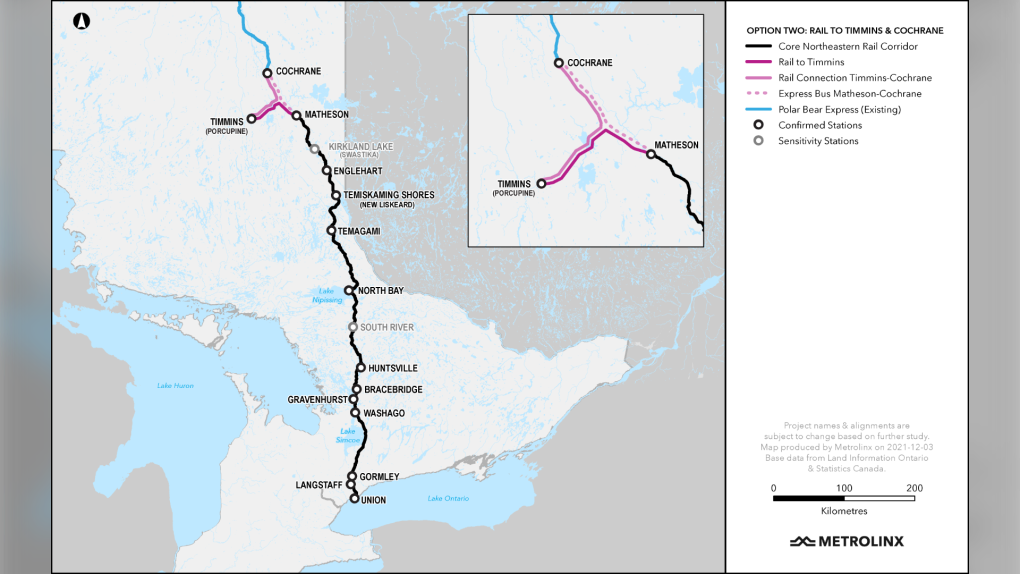 The Ontario government announced it is reinstating passenger rail service between Timmins and Toronto after it was cancelled in 2012. April 10/22 (Supplied)

"The previous government chose to cancel this rail service, cutting people and economies in northeastern Ontario off from the rest of the province," Ford said in a news release.

"At a time when our government is building up home-grown supply chains that connect resources, industries and workers in the north with the future of clean steel, electric vehicles and batteries, we’re restoring this vital transportation link. We’re getting it done and bringing passenger rail back to northeastern Ontario."

The announcement comes with the release of visuals outlining the tentative rail line, including 14 confirmed stations from Cochrane to Toronto, two "sensitivity stations" in Kirkland Lake and South River and an express bus route from Matheson to Cochrane.

A partnership between the province, its transportation company Ontario Northland and CN Rail, which owns the tracks between North Bay and Toronto, the project is expected to connect around 176,000 northerners to southern Ontario.

The project would also allow connection to the Polar Bear Express from Cochrane to Moosonee.

Timmins Mayor George Pirie said he was thrilled with the news.

"The return of passenger rail to Timmins is imperative to our region’s growth and prosperity. As a regional hub and with Porcupine as the future terminus location, we will most certainly see a positive impact on our tourism and industry sectors," said Pirie, who is also the city's Progressive Conservative candidate for the upcoming provincial election.

"This investment solidifies the government’s belief in our city. Residents will have another viable travel option to Toronto and points south. This is imperative for access to medical appointments and travel. It will improve our quality of life and the well-being of the community by strengthening access to and from Timmins and the north."

The province is projecting passenger rail service could be running in the northeast once again within the next three to six years, and possibly sooner, Dakota Brasier of the Ministry of Transportation told CTV News in an email.

On Friday, Ford was in Sault Ste. Marie to announce a new program called the Northern Energy Advantage which will help reduce electricity costs for the region's industrial sector. Read more about that here.

Ontario's next provincial election is less than two months away, on June 2, and the Progressive Conservatives will be trying to hold onto power.

Ontario Ministry of Transportation spokesperson Dakota Brasier clarified the restored passenger rail service could resume in the next three to six years or sooner, which is earlier than the five to eight years initally reported.

Some emergency rooms across Canada shutting down amid staff shortages

Hospitals overwhelmed by the pandemic’s onslaught are still facing a number of challenges, causing unprecedented wait times in emergency rooms across the country.

Twin brothers in their early 20s were responsible for the shooting that injured numerous police officers at a bank in Saanich, B.C., earlier this week, RCMP alleged Saturday.

Researchers in British Columbia say the province's endangered southern resident orcas have not been getting enough food for years, with some of the worst bouts of hunger occurring since 2018.

It's been said no one's success is complete without failure, but a new international exhibit in Calgary is proving that even some of the most talented innovators had some of the worst ideas for consumers.

Animal rescue groups are criticizing a new policy by the Canadian Food Inspection Agency that will ban the import of dogs from more than 100 countries.