Expert weighs in as anti-mask movement emerges in Sudbury 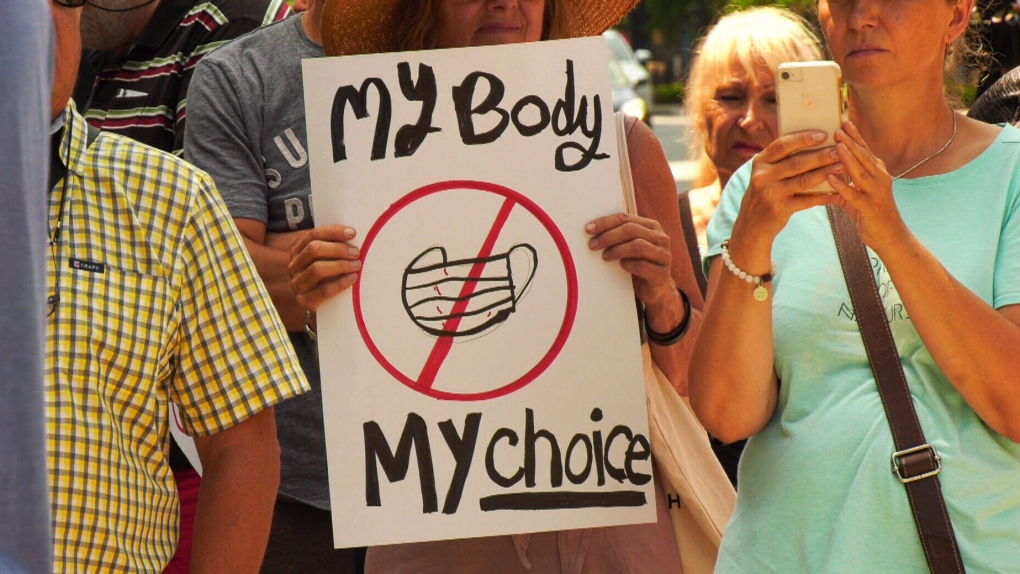 SUDBURY -- Since it began, the COVID-19 pandemic has divided people, with those on both sides arguing their beliefs online. Some believe it is a serious health crisis, while others think it is all a hoax.

A Sudbury Facebook group created earlier this month has signed up hundreds of members dedicated to opposing emergency measures imposed to fight the COVID-19 pandemic.

Dr. Jay J. Van Bavel, associate professor in psychology and neural science at New York University, is the lead author of a paper, 'Using Social and Behavioural Science to Support COVID-19 Pandemic Response', that looks at the psychological impact of the pandemic.

Van Bavel said stress and anxiety trigger different responses, ranging from extreme fear of leaving the house to the sort anti-mask movements that are popping up.

While members of the Sudbury Ontario FREEDOM Keepers group oppose several of the measures, one common item is fierce opposition to being forced to wear masks in public to limit the spread of the disease.

Van Bavel said people who were prone to believing in conspiracy theories before the pandemic are far more likely to oppose public measures to limit the spread of COVID-19. For example, if someone thought vaccines were a conspiracy by pharmaceutical companies pushed by governments, it's unlikely you believe what health authorities are saying now about COVID-19.

As of Thursday morning, the Sudbury Facebook group had 308 members, including 171 who signed up this week, and it appears to now have branches in smaller communities such as Elliot Lake.

CTV News messaged several members asking for an interview, but all declined to speak before publishing time, citing the "harassment" they have been getting as word of the group gets around, and their general distrust of the mainstream media.

Their public posts, however, offer some insight.

A common theme is a link to the anti-vaccination movement, a profound distrust of pharmaceutical companies, government and mainstream media and a focus on a perceived loss of rights and freedoms.

"When you google anything natural, you will get pages and pages of pharmaceutical websites," one post read. "This is censorship. They don't want you to find out the truth. They want to keep you sick ... Studies on risks of masks and their ineffectiveness are also disappearing."

Van Bevel also knows he can talk facts and logic until he's blue in the face, and for some people, he's just confirming the conspiracy is real.

"The challenge of conspiracy theories is that they don't necessarily follow logic," he said. "And the other problem with them is that if I, as a scientist, try to correct the conspiracy theory, then that is just seen as more evidence of the conspiracy scientists are trying to suppress us from seeing the truth."

Another post of the anti-mask Facebook group linked the current situation with the rise of fascism in Europe after the First World War when safety measures were imposed to limit the spread of the Spanish Flu during the last major pandemic in 1918.

"Under the pretext of perceived threats to society, laws were enacted to protect safety, but that came to the detriment of freedom, prosperity and rights," the post said. "The Canadian and Ontario governments are responding much as Spain, Italy and Germany did with the last pandemic by diminishing democracy and freedoms while joining forces with large corporate interests such as big box stores and WE."

Van Bavel said it's one thing, for example, to believe in conspiracies such as the Earth being flat since it doesn't do much harm. But adopting that attitude to the current crisis -- not believing in science during a pandemic -- is dangerous.

"We're now in a case where the harm is incredible," he said. "In just in the U.S. alone, I think we have 140,000 people who died and I think over four-million people who've been infected -- and that's just the ones we know about. There's probably many more that haven't been confirmed of deaths and infections."

Other posts in the local Facebook group link COVID-19 to 5G wireless technology, claim the number of positive tests is egregiously overstated, and on and on down the rabbit hole. That the claims have been debunked by several government authorities has no impact on people who believe in such conspiracies, he said.

"It's the worst time (with the first pandemic in) over 100 years and yet, there are people who are spitting conspiracy theories about it: It's a hoax. It's made up. It's caused by 5G towers. And so that's the case where these people might do dangerous things or take risks," said Van Bavel.

So what's going on?

At the root of the issue for many people is distrust – of government, health authorities, science and anyone who disagrees with them.

"People have kind of a hyper-vigilant, anxious threat response that is normally adaptive in dangerous situations," said Van Bavel. "And then you have another set of people -- and I found this in recent studies -- who are overly optimistic. They might even be aware of the threat in the environment as well as others, but they don't think it applies to them. And so they end up having this assumption that they'll be OK."

Complicating matters is the range and depth of misinformation available online that feeds into these sorts of beliefs. For every official warning about the danger of the virus, there are several websites that will tell you the opposite is true.

"So there's multiple factors right now because of the misinformation that's percolating out there," Van Bavel said.

There's a strong desire among many people for things to return to normal, he said, especially for people who have lost jobs, forced to miss or cancel major life events or who are just lonely.

"These types of things are affecting millions of people right now around the globe," Van Bavel said. "So there's a lot of distress and anger and frustration around those things. And so there is a desire to return to normal. I think that's the key."

Countries that have more of a sense of collective social responsibility – such as in Asia – have had more success in flattening the COVID-19 curve than nations such as the U.S., where the national identity is based on individualism and resisting conformity.

"If you look around the world, many of the countries that are having a harder time dealing with the pandemic are more individualistic cultures, because they don't necessarily go along with what everybody else is doing or what's expected of them," Van Bavel said.

"And, you know, I appreciate that lots of great benefits come from individualism. But I will say the pandemic is one of those rare cases that if you don't do these kinds of collectively-oriented behaviours, you won't get your freedoms back," said the doctor.

The contradiction in that logic is the more people that resist wearing masks, the longer masks will be needed.

"I mean there is a study by Goldman Sachs suggesting that if everybody wears a mask -- especially indoors, where it's really key,  then the economy would not be hit nearly as hard and industries would be able to open, jobs would be able to be sustained because they reduce risk so much for people," Van Bavel said.

He said governments should focus on the message that returning to normal will happen faster if everyone who is able wears a mask. In other words, they are a path to restored freedoms, rather than a barrier, Van Bavel said.

"You know, many people are helping their neighbours or pulling together," he said. "But some of these conspiratorial mindsets … also getting triggered in this situation."

Van Bavel said conspiracies are causing people to take risky chances with their lives as well as the lives of their families and communities.