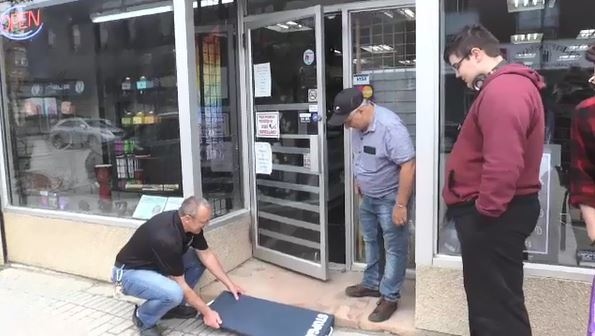 It was Luke Anderson's first time so far north, but he wanted to offer thanks for their efforts in eliminating barriers in the downtown core.

Luke Anderson is a co-founder of "Stop Gap Foundation, "an organization helping communities discover the benefits of barrier free spaces.

And he’s in Timmins to cause "a disruption."

“Disruption is such an important ingredient into creating the change that we would like to see in our communities,” said Anderson

He’s engineered ramps after a biking accident made him aware of the many barriers cities have.

“Little steps on store fronts, those can be impacting to someone, like how do you get over that and as a community we should be trying to stop that, ”  said Tyler Whelan  of O’Gorman High School.

Whelan is one of several students who helped build the ramps that will be available at many businesses in downtown Timmins.

“We have twenty-six that we’re getting made in total for right now for just the downtown,  and then we’re hoping it’ll encourage some of the outside area to get more ramps and be involved, ” said Noella Rinaldo of Downtown Timmins.

“I had a student who ended up having a serious snowmobile accident, he ended up in a wheelchair and he approached me years ago about some type of accessibility for downtown,  and it put the bug in my ear. When Noella called it was a no brainer,” said J.P. Gauvin, a teacher at O’Gorman High School.

Mike young is buying into the idea—tossing away what he’s been using to assist people using wheelchairs.

“Simple handle, light and it’s also independent too which is really important, when I have to help somebody in, it just takes away that independence they want, ”  Mike Young of Altered Reality.

With Ontario aiming to be "barrier free" by 2025, many local businesses aren’t waiting,  saying it’s not only the right thing to do...it’s also bringing them new clients.