Barber celebrates 55 years in the business 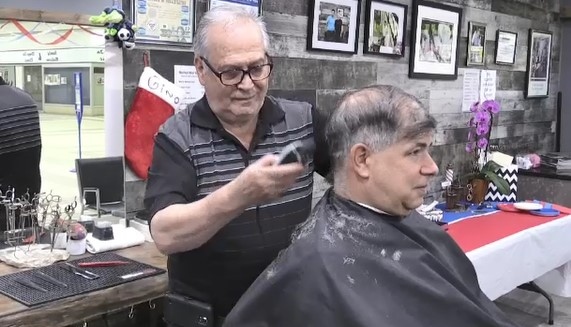 He started working in the industry when he was 14-years-old. Honing his skills at a young age, he worked his way up from sweeping barber shop floors to learning how to shave and cut hair.

At the age of 19, Polito moved to Canada and pursued his passion for barbering. He attended Sault College where he earned a certificate in hairstyling. He then worked at a few different places before finding his home at The Marker Mall Barber Shop where he has worked for 37 years.

One of Polito's co-workers Franco Cuglietta says he's learned a lot from Polita, commenting that the "things he's teaching me as far as the old traditional barbering is unbelievable. I got my own classroom with him with no other students, so it's great working with him every day."

Polito's coworkers aren't the only ones following in his footsteps. Trino Onofrio, Polito's daughter, says it runs in the family.

"It's me, my sister and my mom. We all do it and we love it. So we all learn from each other. But my dad, for barbering, he's got the touch."

One customer certainly agrees that Polito has the touch as he's been going to him for 50 years.

"I follow him all over town. He changed so many barbershops, so wherever he went, I went. When he was on holidays, I had to go to another barber. He didn’t do the same job as he did. So I'm still here," said Domenic Barbuto, Gino's long-time customer.

"Thank you to my customers for 50 years… thank you very much," said Polito.

Those close to Polito say he always comes to work with a smile, to which Polito responds with as long as he's happy and healthy, he'll continue cutting hair.