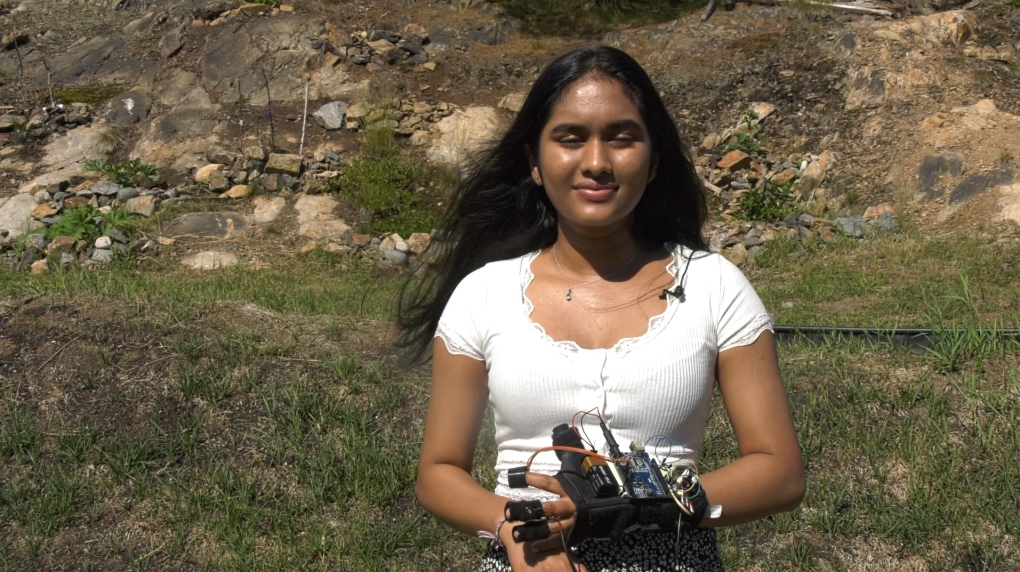 It is Wickramasinghe's hope that a device like this could become common place and considered an alternative to clinical therapy. June 28/2020 (Ian Campbell/CTV News Northern Ontario)

SUDBURY -- At 16-years-old, Nethra Wickramasinghe is already making headlines in the scientific community with her latest innovation.

It then connects the data to an app and tablet which uses cognitive behavioural therapy to provide support.

"It started three years ago and originally it was just a device that measured heart rate and attributed that to symptoms of major depressive and general anxiety disorder and over the years I've added more sensors so now the wearable device measures heart rate, skin tension and skin temperature," explained Wickramasinghe.

According to Wickramasinghe, it uses machine learning algorithms to detect patterns and variances in the users biofeedback and relates that back to cognitive therapy treatment plan which is based on the symptoms that the user outputs.

The young teen tells CTV News that mental health is a big issue and one that deserves the attention of the scientific community.

It is her hope that a device like this could become common place and considered an alternative to clinical therapy.

"I've received a lot of support from my school community, especially from my peers and my teachers. I've always been encouraged in all my science classes to share my project and to speak with my peers about it and I think that's a very good opportunity to inspire other students to consider paths along the STEM (Science, Technology, Engineering and Math) field," she added.

"I spent my teen years watching the Love Boat and you know, not obviously doing the work that some of these kids are doing, it's so impressive. We basically scour the country and invite kids to apply every year in October," said Sabrina Greupner, manager of the Weston Family Innovation Centre.

Greupner was part of the judging panel and she tells CTV News every year she is blown away by what these young people are able to accomplish.

"For Nethra and the other candidates, this just isn't a short-term project, some of them have been working on this for months and years," she added.

"I strongly believe this device could be an alternative and a resource for people to seek when they don't have those clinics or resources available to them," said Wickramasinghe.

The young teen has some more work to do on the device but the end goal is for this to one day reach the market.

Wickramasinghe hopes to pursue a career in the psychology field.