SUDBURY -- Because CTV's Sudbury studio backs onto a greenbelt, wildlife is often spotted in and around the building. Have a look our most recent visitor. 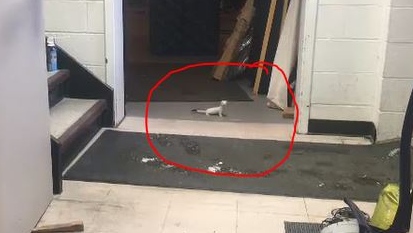 Jolanta Kowalski, of the Ministry of Natural Resources and Forestry, say this small, white weasel is called an ermine, or short-tailed weasel.

This type of animal has been previously spotted in the building, but never captured on camera, until now.

Ontario Fur Managers Federation says the animal is very alert, curious, and bold. This behaviour was exhibited Tuesday morning in the CTV Sudbury studio, as the weasel came right into the newsroom while many staff was working. It was also seen scampering throughout the building.

Weasels are active throughout the year and are mainly nocturnal; however they do also hunt during the day, explaining Tuesday's sightings.

Described by OFMF as a persistent hunter, they mostly depend on eating mice, but will also prey on larger woodland creatures and insects.

Kowalski says its presence is not a cause for concern.

OFMF says weasel pelts have long been associated with luxury and royalty; however, they have only played a minor role in the fur trade.

Not to worry though, no one will be attempting to trap this station visitor!