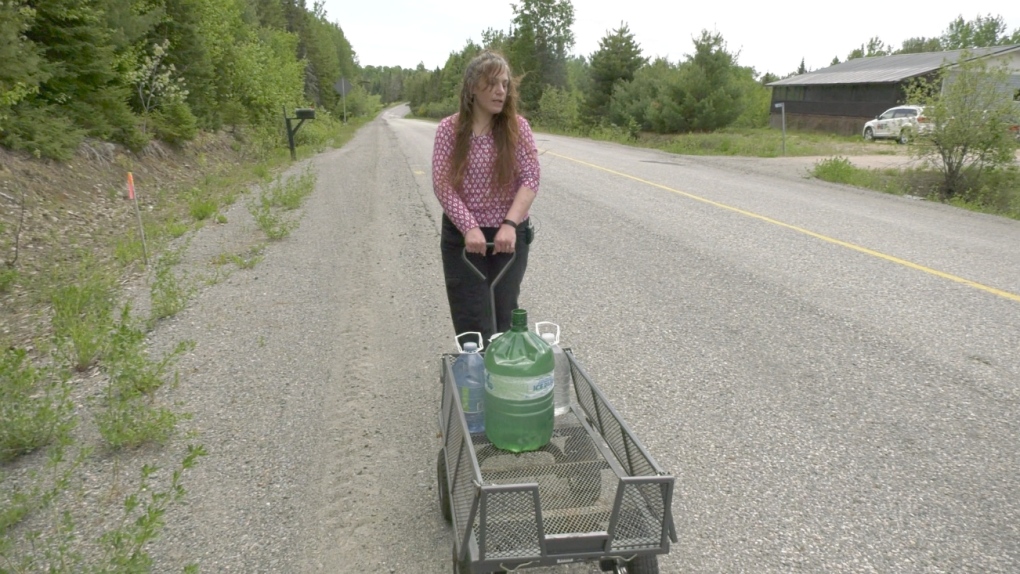 West Nipissing resident Lori Scully, who's living with fibromyalgia and is on disability, has been told it'll be three to four years before she can get access to clean drinking water.(Ian Campbell/CTV News)

VERNER -- Lori Scully is at her wits end and has run out of options. She's been living without running water for more than a year after a power outage cut the supply from her well.

Scully is living with fibromyalgia and is on disability. She asked for help from the province for the $2,000 repair bill and was turned down.

She's been told her only option is the Ontario Renovates program, which would subsidize the repair. But she's on the waitlist and has been told she's has at least another three years before she can expect help.

Scully says it's about $200 just for a repairman to come out and look at the site, while the Ontario Disability Support Program gives her less than $1,200 a month to make ends meet.

As a result, she's been using her neighbour's garden hose and lugging jugs of water back and forth from his property to hers via a garden wagon.

The physical exertion, combined with her condition, can leave her out of commission for days.

"It's been a pretty rough year," Scully said. "I'm just scared come winter time that we're going to have another cold winter and then I'm going to be in real trouble."

She lives in a part of the municipality where it can be a lengthy walk to your nearest neighbour. She's just thankful her neighbour has been able to help her out so that she can have water to do things like cook and bathe.

"I've been doing this for the past year, as well as a plastic port-a-potty," she said.

Scully says she's exhausted all of the avenues she can think of to get help and the only program that can, Ontario Renovates, has a long waiting list.

As a last-ditch effort, she's been fundraising in hopes of coming up with the repair costs.

Monique Woolnough, of the Sudbury Community Legal Clinic, said Scully's case is an example of the gaps in the social safety net.

"I think this pandemic has really brought to light all the ways that people are at risk because of these failures of our society to provide them with the support that they need," said Woolnough, a lawyer who has been representing Scully, directing her to programs that could help her solve her water crisis.

"I would hope that the province raises our abysmally low social assistance rates," she said. "No one should have to live on less than $1,200 a month and the federal government has just recognized that by setting the CERB at $2,000 a month which is much more than what people in poverty have been living on." CTV News did make inquiries to the municipality, MPP John Vanthof and the Ministries of Children, Community and Social Services, as well as Municipal Affairs and Housing.

Vanthof said he sent letters to the minister responsible in hopes of getting him to intercede on Scully's behalf.

The Ministry of Municipal Affairs and Housing declined to comment on the lengthy waiting period she now faces, telling CTV the power rests with municipalities who are designed to act as service managers.

"As part of the Community Housing Renewal Strategy, we are investing nearly $1 billion in 2020-21, which will help sustain, repair and grow community housing and help end homelessness in Ontario," the statement added.

Mark King, chair of the Nipissing Social Services Administration Board, tells CTV a three-year wait for water is not appropriate.

"This sounds like a specialized case to me," King said. "We can certainly look into it for some sort of DNSSAB funding agreement, I have not been advised of ties case in particular. We should be able to do something for her."

For her part, Scully said surviving the summer will be a struggle.

"I'm barely making it as it is," she said. "It's just gotten harder and harder as the months have gone on to keep up, and although I've accumulated more jugs. That just means more lifting.

"I used to be able to get the water every three days but I can now stretch it to a two week period."

With files from Eric Taschner