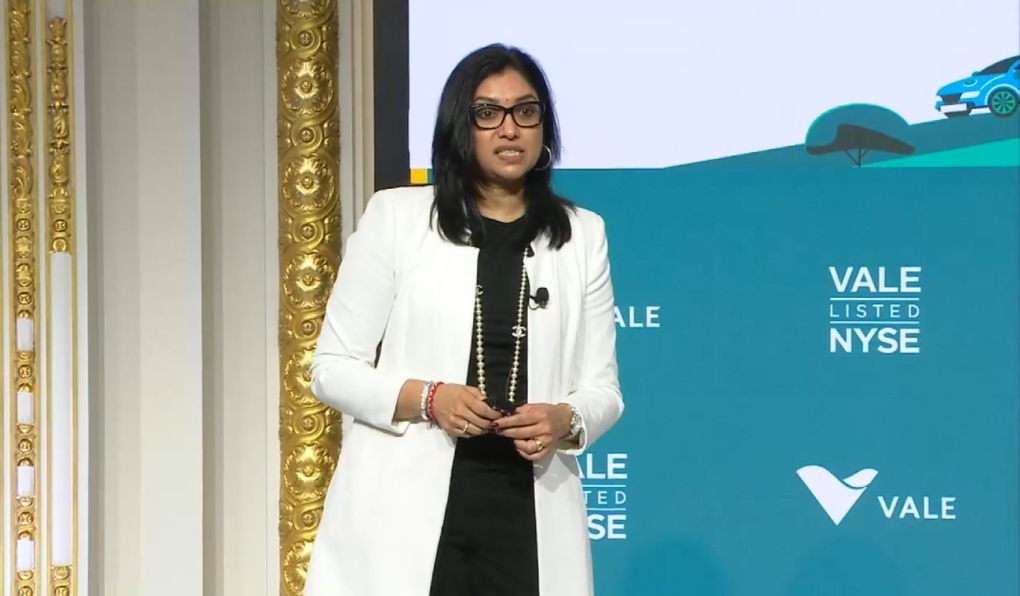 Deshnee Naidoo, the company’s executive vice-president of base metals, said Vale is a world leader in the production of energy transition materials. (Photo from video)

Vale Ltd. is committed to splitting off and growing its nickel and copper business, company officials told investors this week.

Speaking in New York on Wednesday, CEO Eduardo Bartolomeo said the company’s nickel assets in the north and copper assets in the south uniquely position Vale to supply the metals needed for decarbonisation “that the energy revolution is bringing to us.”

“When we arrived and acquired Inco in 2006 … we acquired the best sulphide assets there are in the Sudbury Basin,” Bartolomeo said.

The company is known as primarily an iron producer, but officials said this week that they are putting a new emphasis on developing base metals needed for electric vehicles.

Deshnee Naidoo, the company’s executive vice-president of base metals, said Vale is a world leader in the production of “energy transition materials.”

“This is nickel and copper’s time,” Naidoo said. “It’s all about EV growth.”

“All of this translates into a bright future for nickel and copper,” she said.

“We are uniquely placed to deliver on the demand growth.”

Vale can produce the metals with a low carbon footprint, she added.

“For base metals, more than 90 per cent of our electricity comes from renewable sources.”

And the plant they are building in Quebec can process 25,000 tonnes nickel into 110,000 tons of factory grade nickel sulphate.

“That will go to GM,” Naidoo said, a reference to the company’s recent deal with the auto giant.

She said a new operations centre in Sudbury is a great example of how the company is committed to improving safety and production.

The integrated remote operations centre connects operations at Creighton Mine, Coleman Mine and Totten Mine. Longer term, she said it will oversee all Vale’s mines in Canada, which include operations in Manitoba and Newfoundland.

The centre allows operators to monitor activity, as well as remote controlled operations that have already helped boost production by 10 per cent this year at Coleman and Creighton.

On Tuesday in Ottawa, Canada's 13 premiers and Prime Minister Justin Trudeau will sit around the same table in person for the first time since COVID-19 hoping to find a path toward a new long-term health-care funding deal.