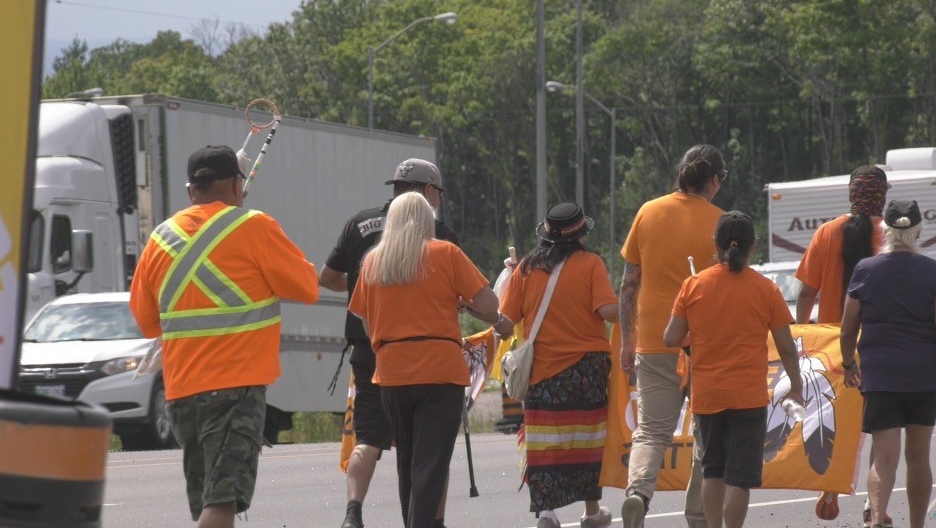 A group of residential school survivors and their supporters, call themselves the 'Upcoming Warriors,' arrive in North Bay on their walk from Timmins to Ottawa. Aug. 17/21 (Jaime McKee/CTV Northern Ontario)
North Bay -

More than 15 Indigenous people arrived in North Bay Tuesday as they walk from Timmins to Ottawa.

The group is calling themselves the 'Upcoming Warriors.' Some are residential school survivors and others are family members supporting each other.

Members of the group told CTV News this journey is about continuing to raise awareness about the residential school system's history and to begin healing.

"To get that cause out there is pretty much why and to stay 100 per cent connected," said Gordon Hookinaw. "The strength of where we come from in Canada, that's pretty much the main thing. To open eyes in the youth and to the elderly."

"It's really come full circle now. From the time when those residential schools first opened to now, you know," McLeod said. "We can actually start healing from what had happened over the last century and a half and hold the governments and churches accountable for the atrocities that were committed against these people."

The Upcoming Warriors are encouraging people to join their walk as they continue on to Ottawa and said they are interested in speaking with members of government along the way.