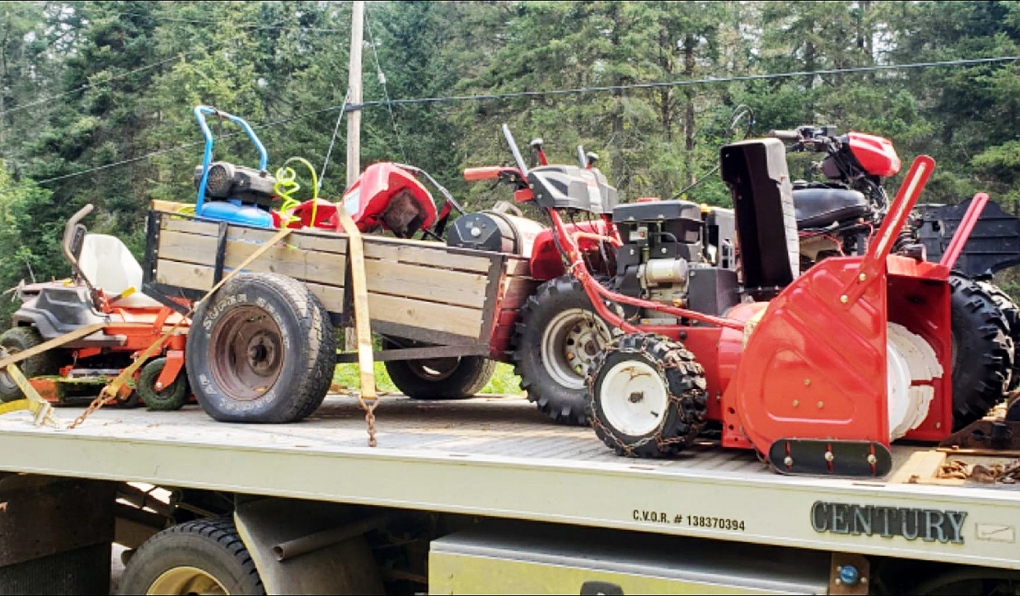 Recovered items include an ATV and a riding lawnmower, both with identification numbers removed. Police also found 88 power tools and construction equipment, a utility trailer and a snowblower. (Supplied)
Sudbury -

Two residents of Nipissing Township have been charged in connection with a break and enter at the Canadian Tire in Huntsville on July 19.

Ontario Provincial Police said they received reports of shoplifting and a break and enter at the William Street store.

An investigation led to the raid of a residence July 27 involving OPP, as well as police from Muskoka and North Bay. A search of the residence uncovered items worth more than $10,000.

Recovered items include an ATV and a riding lawnmower, both with identification numbers removed. Police also found 88 power tools and construction equipment, a utility trailer and a snowblower.

The suspect was scheduled to have a bail hearing on today in the Ontario Court of Justice North Bay.

A 49-year-old has been charged with possession of property obtained by crime. They have been released with a court date of Aug. 24 in the Ontario Court of Justice North Bay.

The OPP is asking anyone with information about these occurrences to contact the Huntsville OPP Detachment at 705-789-5551 or the OPP Provincial Communication Centre at 1-888-310-1122.

You can also provide information anonymously by contacting Crime Stoppers of Simcoe Dufferin Muskoka at 1-800-222-TIPS (8477) or online at ontariocrimestoppers.ca. When you contact Crime Stoppers you stay anonymous, you never have to testify, and you could receive a cash reward of up to $2,000 upon arrest.

The former Liberal candidate elected in Spadina- Fort York has confirmed he intends to represent the riding in Ottawa despite calls for him to step aside after a past allegation of sexual assault came to light.

Hundreds of thousands of white flags planted in D.C. to commemorate those who died of COVID-19

Hundreds of thousands of white flags covering 80,000 square metres of the National Mall in Washington, D.C., have been planted in memory of the lives lost to COVID-19 in the U.S..

Croatian police said Wednesday they have established the identity of a woman who was found in a remote area on a northern Adriatic island with no recollection of who she was or where she came from.

The FBI is asking for the public's help in finding Gabby Petito's fiance Brian Laundrie after a coroner made an initial determination that Petito died by homicide.

The United Conservative Party says it will be moving up its annual general meeting in 2022 from the fall to the spring, and it's Jason Kenney's idea to do so.