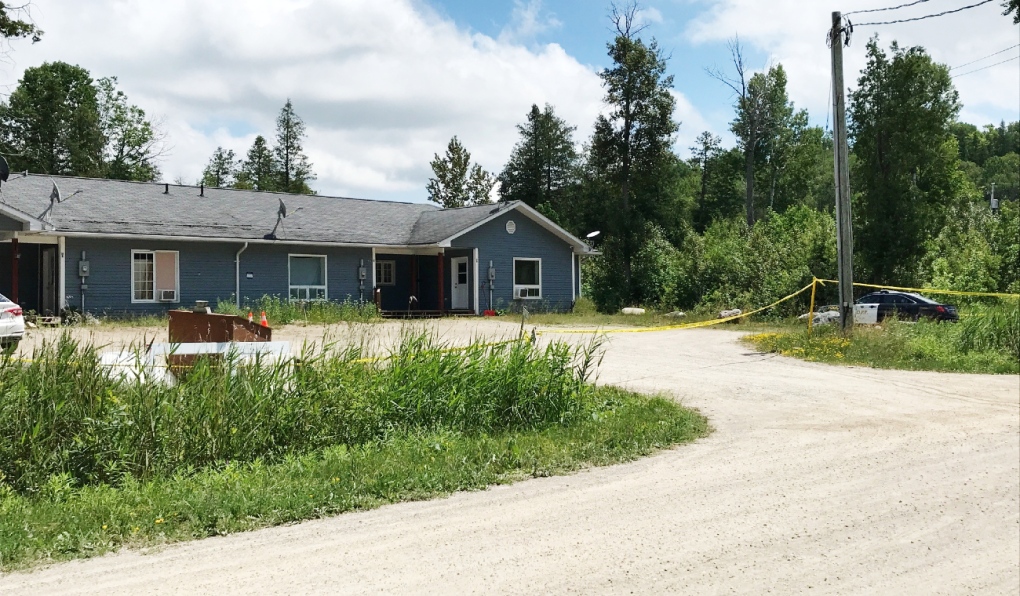 While the main suspect still hasn’t been caught, two people have been charged in connection with a murder that took place June 24 on Manitoulin Island. (Ian Campbell/CTV News)

While the main suspect still hasn’t been caught, two people have been charged in connection with a murder that took place June 24 on Manitoulin Island.

A 55-year-old resident of Northeastern Manitoulin and The Islands, and a 25-year-old from Whitefish River First Nation have been charged with being an accessory to murder after the fact and obstructing police.

Both accused have been remanded in custody until scheduled court appearances on July 20.

An arrest warrant is still in effect for Hanif Duncan, 20, of Hamilton. Duncan is charged with second-degree murder, He is described as black, between 5-foot-8 and 5-foot-10 with a slim build and long dreadlocks.

"Investigators believe this was an isolated incident and there is no public safety risk," Ontario Provincial Police said in a news release Thursday.

"The accused is encouraged to turn himself in to police."

If anyone with information regarding the incident is asked to contact the OPP at 1-888-310-1122 or your nearest police service. To remain anonymous, can call the Sudbury Rainbow Crime Stoppers at 1-800-222-TIPS (8477) or submit your tip online.

The fatal film-set shooting of a cinematographer by actor Alec Baldwin last year was an accident, according to a determination made by New Mexico's Office of the Medical Investigator following the completion of an autopsy and a review of law enforcement reports. The medical investigator's report was made public Monday by the Santa Fe County Sheriff's Office along with numerous reports from the FBI on the revolver and ammunition that were collected following the shooting.

While many Canadians don’t support moving away from the metric system of measurement, many continue to use imperial measurements in their daily lives, according to a recent online poll.

For the second time in less than a month, a resident of Ashcroft, B.C., died while waiting for health care after having a heart attack mere metres from a local ambulance station.

Economists predict a 'mild recession,' but what would that look like in Canada?

With inflation on the rise and central banks poised to increase rates, CTVNews.ca speaks with experts on whether Canada will experience a recession, and if so, what it would look like.

Minister of Families, Children and Social Development of Canada Karina Gould is discouraging people from making fake travel plans just to skip the line of those waiting for passports.

'I have to fight for myself': Quadriplegic man says N.S. government told him to live in a hospital

A diving accident at 14-years-old left Brian Parker paralyzed from the chest down. Now at age 49, he's without the person who was caring for him full-time until just last week, after his 68-year-old mother was diagnosed with breast cancer.

Actress Bryce Dallas Howard said she was paid 'so much less' than her co-star Chris Pratt for their work in the 'Jurassic World' films.

'This is our land': Wet'suwet'en hereditary chiefs, pipeline opponents rally in Vancouver

Opponents of the Coastal GasLink pipeline currently under construction in Northern B.C took to the streets of Vancouver Monday, briefly blocking north-bound traffic on the Cambie Street Bridge.

The international community needs to step up to hold the Taliban accountable for human rights abuses in Afghanistan, a year after the militant Islamist group took control of the country and limited the rights of women and girls, according to Heather Barr, associate director of the Women's Rights Division of Human Rights Watch.