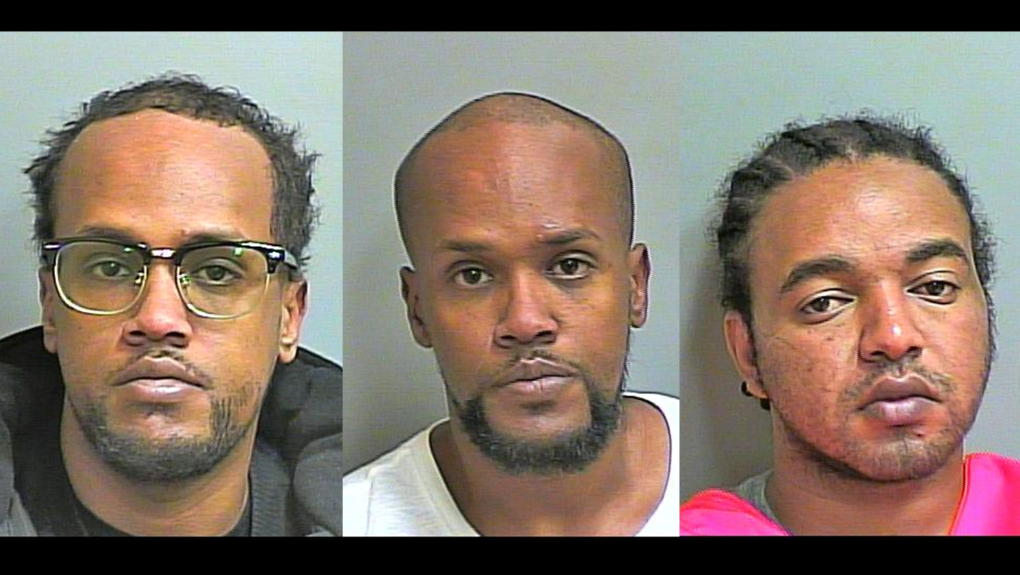 Canada-wide arrest warrants have been issued for Awale Abdi (left,center) and Mohamed Ahmed (right) who are wanted for Attempted Murder with a Firearm. (Supplied by Greater Sudbury Police Service)
SUDBURY -

The Greater Sudbury Police Service (GSPS) is requesting the public’s assistance in locating two men wanted on Canada-wide arrest warrants for Attempted Murder with a Firearm following an Oct. 23 altercation on Kingsway Boulevard where several gunshots were fired into a crowd.

In a news release issued late Friday afternoon, GSPS confirmed two men suffered non-life threatening injuries but the suspects had fired into a crowd of between 15 and 20 people.

An investigation conducted by the GSPS Criminal Investigations Division, later identified three men police believed to be responsible for the shooting and arrest warrants were issued.

Police have charged 19-year-old Omer Duri with Attempted Murder with a Firearm and other associated offences.

GSPS is requesting the public’s assistance in locating the other two men who are known to frequent other major cities in Ontario.

A Canada-wide arrest warrant has been issued for 35-year-old Awale Abdi who is is wanted for Attempted Murder with a Firearm and numerous other offences. Police say the accused is known to have ties to Ottawa and Alberta.

Mohammed Ahmed, 30, is also currently wanted on a Canada-wide Arrest Warrant for Attempted Murder with a firearm and other offences.  Police say he is known to have ties to Ottawa and Alberta.

It is unclear if the other offences reported are the same as those faced by Abdi or related to the same altercation.

Police are reminding members of the public not to approach these individuals as they are considered armed and dangerous.

SpaceX should choose between Ukraine and Russia: Ukrainian official

Elon Musk's SpaceX should choose sides between Ukraine and Russia, a senior Ukrainian official said on Thursday, after the company said it was curbing Kyiv's use of Starlink internet devices for controlling drones.

Cannabis company Canopy Growth to lay off 800, close and consolidate some facilities

Canopy Growth Corp. will lay off 800 workers as part of a transformation plan that will see the company close its hallmark 1 Hershey facility and consolidate some of its cultivation operations.