For the first time since the football team started playing at the provincial youth level three years ago, the Sudbury Junior Spartans won a U16 Sandy Ruckstuhl Cup championship. 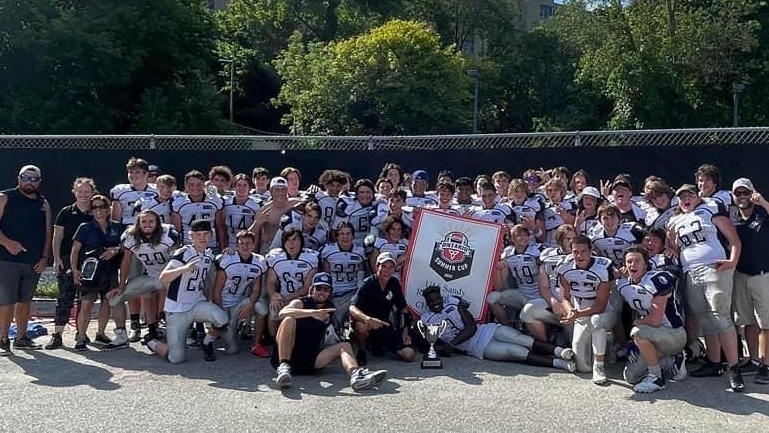 In their quarterfinal matchup, the Sudbury Junior Spartans shut out the Quinte Skyhawks 41-0 and went on to beat the Peterborough Wolverines 34-1 in the semis.

The finals in London on Aug. 6 ended with the 27-25 defeat of the Vaughan Rebels despite a late touchdown, Emma Cacciotti said in a news release.

"We put on our hard hats and went to work for 48 minutes of football. The kids never gave up and ultimately, we came back as OSFL Champions, said head coach Jordan Desilets.

"It was a resilient effort from all our players and coaches on Saturday afternoon, at Alumni Stadium. Sudbury football has officially been put on the map."

It was two decades in the making, Spartans president Gord Goddard is quoted as saying in a news release Wednesday.

"Every person who ever played, coached or was an administrator with the Sudbury Northerners, Sudbury Gladiators or Joe MacDonald Youth Football can share in this championship," Goddard said.

"The vision existed long before this team stepped on the field."

He credits Desilet's coaching staff, the group of parents and several local businesses.

The team's championship will be celebrated Aug. 13 during halftime at the Sudbury Mens Spartan's Northern Football Conference semi-final game against the GTA All-Stars at James Jerome Field.

Police in Halifax say they made an unspecified number of arrests during a massive street party involving thousands of people near Dalhousie University.

King Charles III has decided not to attend the international climate change summit in Egypt next month, fuelling speculation that the new monarch will have to rein in his environmental activism now that he has ascended the throne.

Police firing tear gas after an Indonesian soccer match in an attempt to stop violence triggered a disastrous crush of fans making a panicked, chaotic run for the exits, leaving at least 125 people dead, most of them trampled upon or suffocated.

Laughter lights up the gathering twilight at Langara College in Vancouver, where first-year health science student Jagiit Singh is chatting with friends next to the school's fountain. But his smile fades when he's asked about the cost of living in Canada since moving from India last year.