While most teenagers are just looking at getting their driver's license and maybe taking mom or dad's car out for a spin, Val Caron's Isabel Fredette is taking it to the next step.

Fredette is now the youngest pilot to be employed by the Sudbury-based company, True North Airways, and she's only 18 years old. 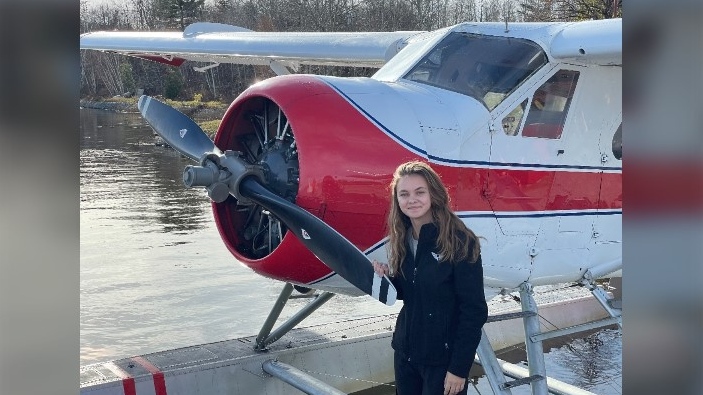 "My dad's a private pilot and then he used to take me up and we would just go. Aviation is a part of the family," she said.

"A lot of our friends fly as well. When you see an airplane, it's hard not to smile, so I easily just fell in love with the industry."

The Sudbury-area teen is so young, she just graduated high school at École secondaire Macdonald-Cartier. CTV News caught up with her only days after her senior prom.

She said she has plans to work at True North in the summer before going on to start her studies in biology at Laurentian University.

"School starts in September and ends in April and that's kind of the whole time that there's ice on the lake and float flying isn't really going to happen, so I thought I could go to school and work in the summer as a pilot and see where that takes me," Fredette said.

Fredette has been flying solo for two years now and to her, the experience is still exciting.

"I always find it funner when you get to take someone with you because you get to share in that experience," she smiled.

"I love going flying with my little sister because I find that so cool, just me and her. It's different than flying, obviously, and you get to say 'oh, look at this,' and just share in those little moments."

Her title as the company's youngest pilot has earned her some notoriety and she's been turning some heads as of late.

She said earning her pilot's license was cool and now she can get around to places that no one else can reach.

"I didn't really tell anyone at school. They mostly found out over the last little bit and no one likes that person who brags all the time," she laughed.

"I am very proud," said her dad, Paul, who is also a private pilot.

"It's a wonderful Father's Day gift to have Isabel have this accomplishment."

He said he has no concerns about letting her daughter fly solo.

"She's been my co-pilot for a long-time. We've logged hundreds of hours together with her as my co-pilot and now, I'm proud to have her as my pilot," he added.

Fredette will still have to complete some training with True North and then, after successfully completing it, she will be able to do solo flights.

The parent company of CTV News says it will launch an internal workplace review amid criticism of its dismissal of Lisa LaFlamme from her role as chief anchor.