After weather-related road closures slowed its trek along Highway 17, half of the "Trans-Canada Freedom Convoy" made its way into Sault Ste. Marie on Thursday night.

Snow squalls and high winds forced the closure of Highway 17 between White River and Batchawana. Organizers decided to split the convoy in two at Nipigon, with half turning onto Highway 11 toward Cochrane, while the other half continued to the Sault.

Highway 17 eventually reopened and crowds lined Great Northern Road as the convoy made its way into town. 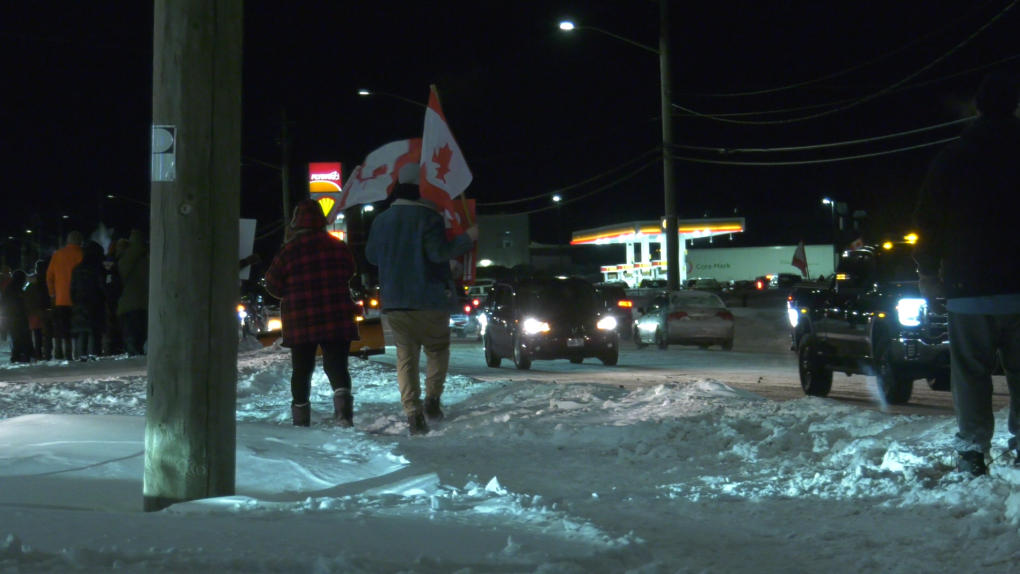 "I think it's really important that we support the truckers," said one supporter.

"It's not part of the anti-vax movement or the pro-vaccination. I'm here because I'm supporting a group of people who I think have really held this country together over the past two years and have had very little recognition for it. So I'm here to support the truck divers for that."

The convoy is expected to depart Sault Ste. Marie early Friday morning on its way to Ottawa.

Toronto Maple Leafs winger Mitch Marner was the victim of an armed carjacking outside a movie theatre in Etobicoke on Monday night, the club confirmed on Tuesday.

International arrivals at Canadian airports are so backed up, people are being kept on planes for over an hour after they land because there isn't physically enough space to hold the lineups of travellers, says the Canadian Airports Council.

Many Canadians feel gun violence getting worse in their communities: poll

Many Canadians say gun violence is increasing in the communities they live in, with residents in major cities and the country's largest provinces mostly reporting such views, according to a new survey from the Angus Reid Institute.

U.S. authorities on Monday announced the discovery of a major drug smuggling tunnel -- running about the length of a six football fields -- from Mexico to a warehouse in an industrial area in the U.S.

Indian couple sue only son for not giving them grandchildren

A couple in India are suing their son and daughter-in-law -- for not giving them grandchildren after six years of marriage.

Mariupol appeared on the verge of falling to the Russians on Tuesday as Ukraine moved to abandon the steel plant where hundreds of its fighters had held out for months under relentless bombardment in the last bastion of resistance in the devastated city.

The Liberal government is moving to ban Russians sanctioned over Moscow's invasion of Ukraine from entering Canada. The government tabled proposed amendments to federal immigration law in the Senate on Tuesday to ensure foreign nationals subject to sanctions under the Special Economic Measures Act are inadmissible to Canada.