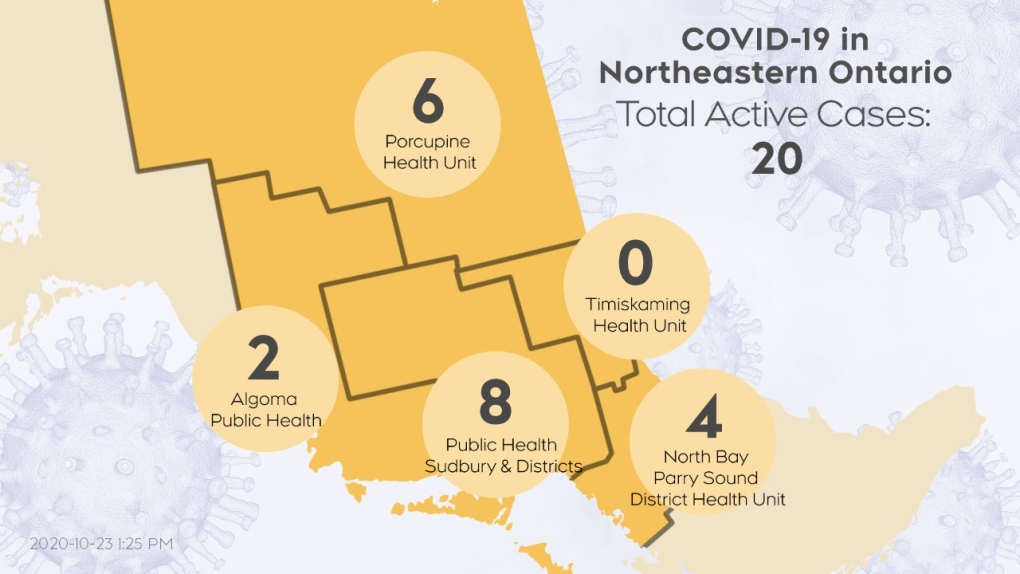 Map showing where the active COVID-19 cases are in northeastern Ontario as of Oct. 21/20 (CTV News Northern Ontario)

As of Oct. 21 at 3 p.m., there are 14 active cases in northeastern Ontario and here is where they are:

There is currently only one active case of COVID-19 in the Algoma District, in the City of Sault Ste. Marie, after a new case was confirmed Monday morning and three others were reported as resolved. The individual is self-isolating after being tested on Oct. 14 and health officials are investigating the point of exposure. Close contacts have been notified by public health.

Health officials warn there is still evidence of community spread.

Since the pandemic began, there have been 40 confirmed positive cases, 39 resolved, and zero COVID-related deaths in the Algoma District. Of the 40 positive cases, 35 come from the Sault Ste. Marie, less than five came from both the Elliot Lake area, central and east Algoma. There have been zero cases in north Algoma.

There are currently five active cases of COVID-19 in the Nipissing District after a new positive confirmation Wednesday afternoon involving a resident between the ages of 60 and 79 and one case involving a 20-39-year-old was resolved. The elderly person is a close contact of another confirmed case and is in self-isolation. On Tuesday a new case of the disease was confirmed in a Nipissing District resident under 20-years-old. The health unit said the infection is due to community spread, meaning they have not travelled or had contact with another known case of the disease, and the individual is self-isolating.

Near North District School Board said on its website Monday that there are two confirmed cases of COVID-19 at Chippewa Secondary School in North Bay. One was announced Sunday by the health unit and involves a student aged 19 or younger.

Of the active cases, two are 19 or younger, two are between the ages of 40 and 59 and one is between 60 and 79-years-old. There is still evidence of community spread.

There are three active cases in the Sudbury and Manitoulin Districts, all within the City of Greater Sudbury, after a new case was confirmed Tuesday night. Health officials say the exposure is travel-related and the individual is self-isolating after being tested Monday.

There are currently five active cases of COVID-19 in the Cochrane District after a resident currently outside the region was confirmed positive for the disease Wednesday afternoon.

The other active cases are located the Hearst-Hornepayne area, Timmins, Kapuskasing, Opasatika, Val Rita-Harty, Moonbeam, Fauquier-Strickland area and one is an individual who is currently outside the region.

On the weekend, families at the Roland Michener Secondary School in the South Porcupine area of Timmins were notified that a member of the school community tested positive for the disease. The District School Board Ontario North East's website says one class at the school is now in isolation as a result.

Since the pandemic began, 92 cases have been confirmed positive in the Timmins, the Cochrane District and the Town of Hornepayne, with 87 considered resolved, including nine deaths. The most recent happened on Aug. 28, when a man in his 70s has died due to complications related to his COVID-19 infection.

Fifty-five the cases have been in the Timmins area, 24 in the Cochrane/Matheson/Iroquois Falls/Smooth Rock Falls area, three in Kapuskasing, four in Hearst/Hornepayne, one resident outside the district, and five in James and Hudson Bay regions.

The Timiskaming District now has zero active cases, after the two most recent positive cases have been designated to other health units and one other case that has been resolved will be counted.

There have been a total of 17 confirmed cases, all of which have been resolved and zero COVID-related deaths in this district.

COVID-19 can survive on skin up to 9 hours, versus 2 hours for the flu, study finds

Canada-U.S. border to remain closed until Nov. 21, at least

Once a world leader in controlling COVID-19, Czech Republic now tops in new cases per capita