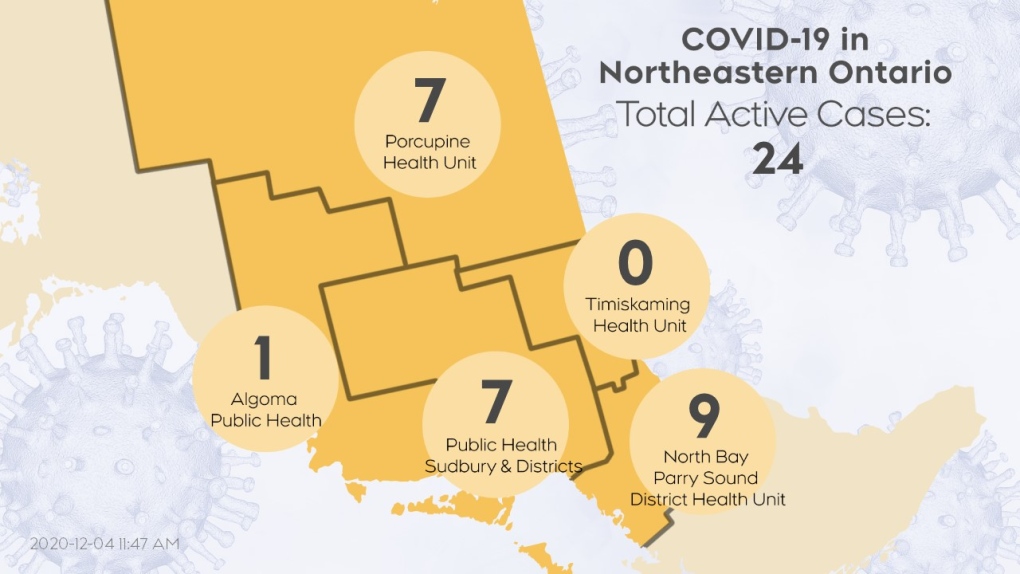 A summary of the active cases of COVID-19 in northeastern Ontario as of Dec. 2 at 5 p.m. (CTV Northern Ontario)

As of Dec. 2 at 5 p.m., there are 20 active cases in northeastern Ontario and here is where they are:

There are still currently three active cases of COVID-19 in the Algoma District after one new case in Sault Ste. Marie was confirmed and another recorded as resolved Wednesday.

Since the pandemic began, there have been 61 confirmed positive cases, 58 resolved, and zero COVID-related deaths in the Algoma District. Of the 61 positive cases, 56 come from the Sault Ste. Marie, less than five came from both the Elliot Lake area, central and east Algoma. There have been zero cases in north Algoma.

As of Wednesday afternoon, there are currently eight active cases of COVID-19 in the Nipissing and Parry Sound Districts after three more cases were confirmed and two were recorded as resolved Wednesday afternoon. One of the new cases is outbreak-associated. Of the eight active cases, three are in the Nipissing District and five are in the Parry Sound District. All but one involve people under 40 and most are close contacts of another confirmed case.

The outbreak declared by public health at Nipissing University in North Bay on Tuesday has grown to a total of 16 cases of COVID-19.

The outbreak was triggered after six members of the university's athletic community tested positive for the disease. All six live off-campus, but three have been on campus. Since then, an additional 10 cases have been confirmed.

This month, there have been 32 new cases of COVID-19, accounting for more than 40% of the total cases in these two districts since the pandemic began.

There are currently eight active cases of COVID-19 in the Sudbury and Manitoulin Districts after one more case was recorded as resolved Wednesday afternoon.

In November, 104 new cases were confirmed, which accounts for more than 45% of all cases in the Sudbury and Manitoulin Districts since the pandemic began.

One of the spikes last month was connected to a Halloween Party held on Oct. 31 at 955 Meadowside Avenue in New Sudbury, the party was held without the homeowner's knowledge. Neither Sudbury police nor Ontario Provincial Police were called about the party, so there have been no charges laid yet, however, if it is found to have violated the province's private gathering restrictions, that could change.

An outbreak declared Nov. 10 at Sudbury's Pioneer Manor after an employee tested positive for COVID-19 has been resolved as of Nov. 21.

In early Nov., Weston Food has confirmed that its Sudbury bakery location has had a 'handful' of employees test positive for COVID-19, as well Real Canadian Superstore has reported several employees have also tested positive. Also this month, two COVID-19 cases were confirmed at Lasalle Secondary School, but no outbreak was declared.

Cambrian College has reported dozens of confirmed cases involved in its school community last month. The total number of new cases or if any of the individuals have been on campus is still unknown, but the school released a statement on Nov. 18 saying three more people disclosed testing positive for COVID-19. This after the school's president, Bill Best, issued a statement Nov. 13 saying that 23 members of the Cambrian community have self-reported testing positive for the disease. Health officials maintain there is no evidence of transmission on campus, therefore no outbreak is being declared.

The province's new response framework went into effect Nov. 14. Public Health Sudbury & Districts is currently listed in the Yellow - Protect category despite a significant drop in the number of new cases.

There are currently no COVID-related hospitalizations at Health Sciences North, but there are eight patients at the Sudbury hospital who have been tested and are waiting for results.

There is currently one active case of COVID-19 after a new one was confirmed in Timmins Wednesday morning. It involves a resident who is isolating and the point of exposure is being investigated by public health.

The last new case was confirmed in Timmins Nov. 20 and was the result of community spread, it has since been resolved.

Since the pandemic began, 107 cases have been confirmed positive in the Timmins District and the Town of Hornepayne, all but one of which have been resolved and include nine deaths. The most recent death occurred on Aug. 28, when a man in his 70s has died due to complications related to his COVID-19 infection.

Federal deficit on track to exceed $381B, as spending increases in wake of second COVID-19 wave

Canada has twice as many active COVID-19 cases as it did on Nov. 1

COVID-19 caused surge in demand for food banks, which was already on the rise: report

Merriam-Webster, Dictionary.com choose the same 2020 word of the year