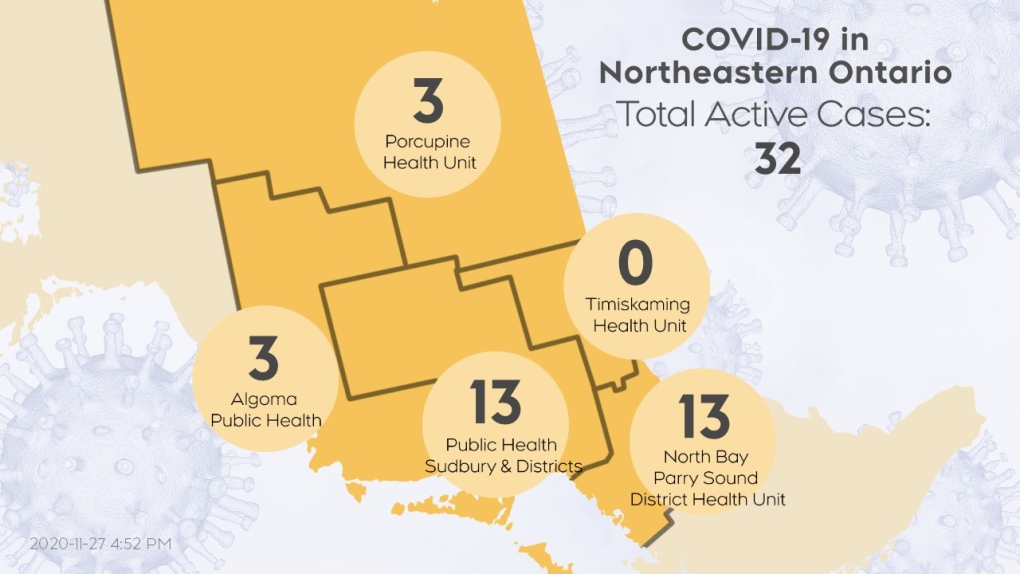 A summary of the active cases of COVID-19 in northeastern Ontario as of Nov. 25 at 3 p.m. (CTV Northern Ontario)

As of Nov. 25 at 3 p.m., there are 35 active cases in northeastern Ontario and here is where they are:

Tuesday morning, public health declared a community outbreak after six members of the Nipissing University athletic community tested positive for the disease. All six live off campus, but three have been on campus.

There are currently 14 active cases of COVID-19 in the Sudbury and Manitoulin Districts after five new cases were confirmed and another case has been resolved Tuesday.

This month, there have been 92 new cases total, which accounts for 41% of all cases in the Sudbury and Manitoulin Districts since the pandemic began.

Two COVID-19 cases have been confirmed at Lasalle Secondary School, but no outbreak was declared.

There are currently no COVID-related hospitalizations at Health Sciences North, but there are two patients at the Sudbury hospital who have been tested and are waiting for results.

There are currently three active cases of COVID-19, including one involving a resident currently outside the region, after one more case was marked as resolved Wednesday.

The Timiskaming District has its first new COVID-19 case since September. It was confirmed by the health unit Nov. 14 and involves a resident who is a close contact of another confirmed case. It is currently the only active case in the district.

Since the pandemic began, there have been a total of 18 confirmed cases in the Timiskaming District, and all but the current case have been resolved. There have been no COVID-related deaths in this district.

B.C. hotel employee has heart attack after being spit on by man refusing to wear mask