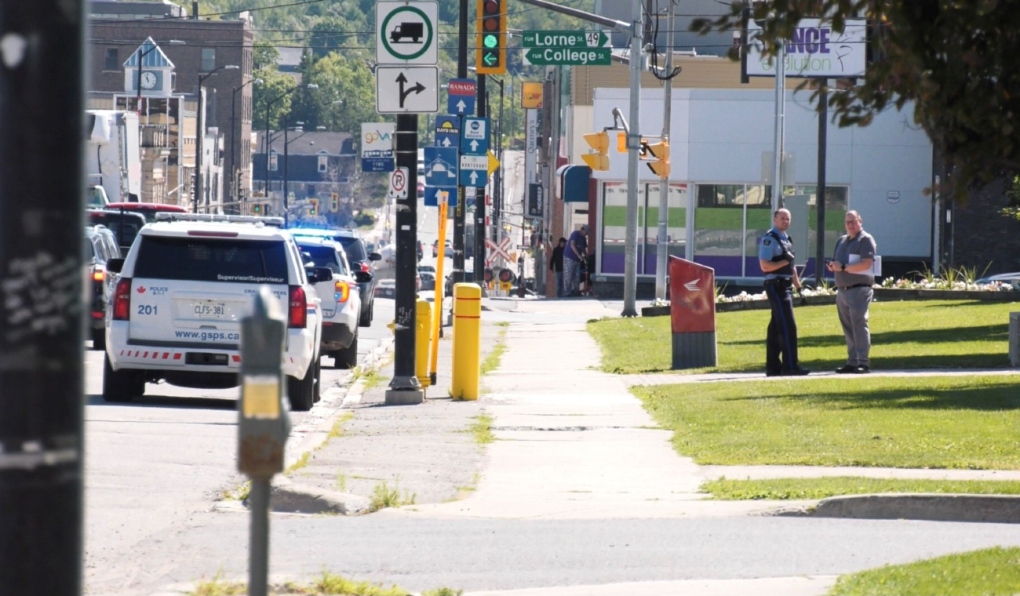 Emergency crews are on the scene at the Sudbury Courthouse on Elm Street on Friday because of a bomb threat. (Molly Frommer/CTV News)

A 25-year-old Toronto man has been arrested and brought to northern Ontario following a phoney bomb threat at the Sudbury courthouse Friday, police say.

The courthouse was evacuated after 911 operators received a phone call at 10:30 a.m. Aug. 5 saying "a bomb had been left inside the courthouse and that it was set to explode," Sudbury police said in a news release.

When no suspicious packages or explosive devices were found during a thorough search of the building, people were allowed to re-enter and court resumed.

Toronto police arrested the suspect on Saturday after he was identified by Sudbury detectives.

The accused is charged with false message, public mischief, uttering threats, mischief under $5,000 and making harassing phone calls. He was also arrested on an outstanding warrant for criminal harassment upon his return to Greater Sudbury, police said.

He is was held in custody over the weekend and is scheduled to appear in court at some time Monday.

Loretta Lynn, the Kentucky coal miner's daughter who became a pillar of country music, has died. Lynn's family said she died Tuesday at her home in Tennessee. She was 90.

'I don't see this getting better': Gas prices in Ontario expected to keep climbing

Drivers should fill up their tanks Tuesday as gas prices in Ontario are forecast to rise in the next few days, with one industry analyst warning that more hikes could be coming.

Elon Musk drew backlash on Monday from Ukrainian officials, including President Volodymyr Zelensky, for his unsolicited advice on how to bring about "peace" amid Russia's ongoing invasion of the country.

Don Martin: An Alberta storm is brewing as Danielle Smith is set to become premier

The next premier of Alberta could well make Conservative Leader Pierre Poilievre look like a right-wing lightweight, Don Martin writes in an exclusive column for CTVNews.ca.

6 California killings may be work of serial killer: police

Ballistics tests have linked the fatal shootings of six men and the wounding of one woman in California -- all potentially at the hands of a serial killer -- in crimes going back more than a year, police said.