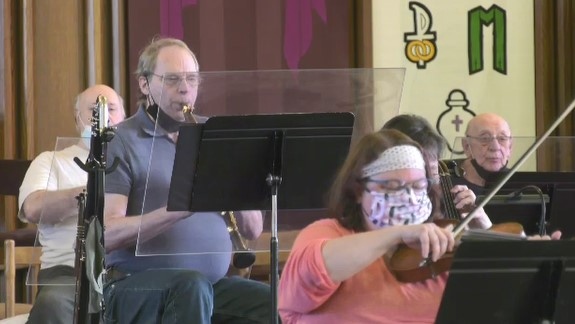 TIMMINS -- The Timmins Symphony Orchestra (TSO) is sharing its music with the city for the first time since before the provincial lockdown in December.

It will be a virtual concert titled 'Winter Memories,' which the orchestra, choir, and chamber ensemble pre-recorded Saturday.

"We have everything from sort of traditional choral pieces, to a film score," said the TSO's music director, Josh Wood.

"It's nice to be back and nice to be fulfilling our mandate of bringing music to the community, which is what we really want to do."

The concert will feature winter-themed performances, including an original composition from the orchestra's principal bassoonist.

Mits Takayesu-Douglas, who is also TSO's librarian and woodwind teacher, said it was slightly nerve-wracking to write his own music that he hopes the community will enjoy.

"This is sort of one of the bigger things that I've done and, actually, this is the first time that I've actually written a solo," Takayesu-Douglas said.

"I would say it's a little bit tongue-and-cheek, there's some humour in here."

The final concert video will also have visuals of orchestra members and their families enjoying winter activities throughout the city, in keeping with the event's theme.

Wood said everyone is relieved to be performing together again in the St. Anthony of Padua Cathedral, albeit for a virtual event — particularly after months of rehearsals via Zoom.

Most of all, he said, they're all thrilled to be able to share their passion for music with community.

"It's just really nice to be doing that again, to see the enthusiasm people have for performing within this ensemble," Wood said.