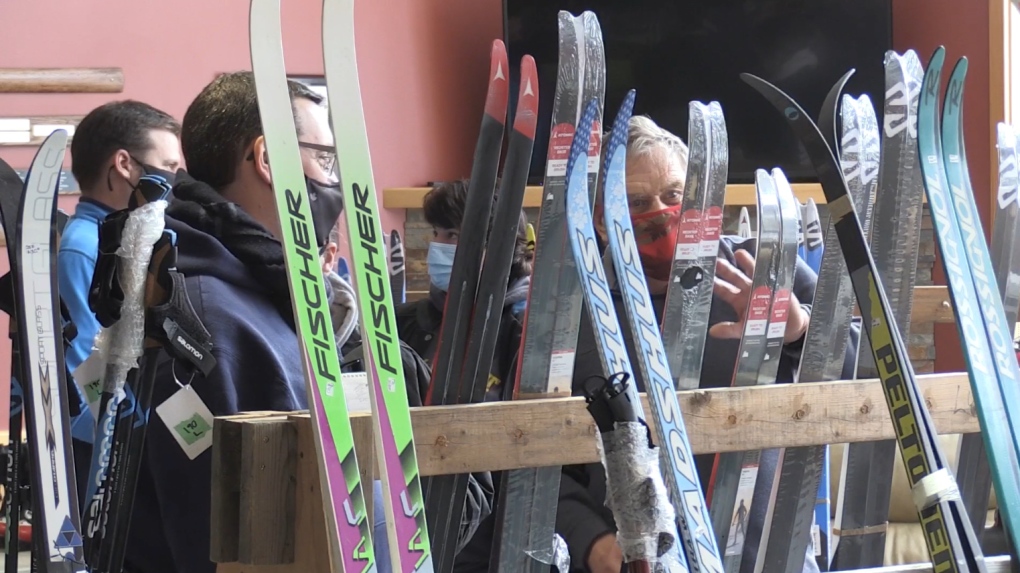 Club members corralled cars around the property and allowed two sets of clients at a time inside the chalet to purchase skis. Nov. 21/20 (Sergio Arangio/CTV News Northern Ontario)

TIMMINS -- The Porcupine Ski Runners saw a larger turnout to its annual 'Ski Swap' event than in previous years, according to club officials.

Former club president Denis Charette estimated at least 50 cars came out to the sale of new and used skis — a sign to him that more people are trying the sport this year.

"People are looking to still stay active within this COVID framework," said Charette.

"We had long lines because we have to follow the safety protocols but people were patient and they were excited to have opportunities to do something this winter."

Club members corralled cars around the property and allowed two sets of clients at a time inside the chalet to purchase skis.

Charette said at least 100 pairs of skis were sold to seasoned and novice skiers alike.

Eight-year-old Theo Trepanier dropped by the club with his grandmother to buy his first pair of skis after a pleasant experience on the slopes last year.

"The only reason why I came to get skis is because... I like skiing," said Theo.

"And you want to do more skiing this year right?" his grandmother chimed in.

"Yeah, so I can go plenty more times when there's more snow."

With the COVID-19 pandemic having people spend less time out in groups and more time at home, Charette said it's an especially important time try a new outdoor activity, once the season begins.

"These outdoor sports — or just being active in general — is healthy not only physically but also mentally, Charette said.

"We know that a lot of people have been cooped up in their house and have not had too many opportunities to be out and about in the community, so I think this will be very positive."

The ski club is hoping snow conditions will allow the ski season to kick-off in mid-December.