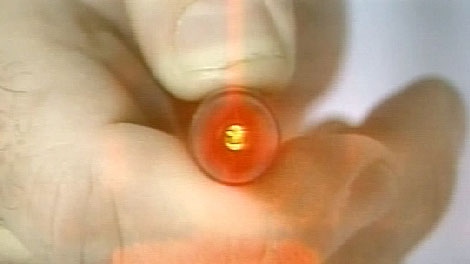 The Timmins Police Service is investigating reports that someone shone a green laser pointer at an airplane in flight on May 27. (File)

SUDBURY -- The Timmins Police Service is investigating reports that someone shone a green laser pointer at an airplane in flight on May 27.

The laser entered the cockpit, police said, and could have had a tragic outcome.

"This type of activity could potentially meet the threshold of a criminal charge ranging from mischief to criminal negligence," police said in a news release Friday.

"The Timmins Police Service cannot be more direct on discouraging this type of behaviour. This kind of activity places the occupants in the aircraft at direct and undeniable risk of serious injury or death."

Such activity is literally a federal offence, police said, and carries maximum penalties of a $100,000 fine and five years in jail.

"This blatant act of foolishness (has) an obvious element of wanton disregard for the safety of persons on the aircraft," police said. "Lasers can temporarily blind the pilot, putting all the people on the aircraft at serious risk."

Aiming a laser at an aircraft can cause a major aircraft collision by distracting or disorienting the pilot, creating glare that affects the pilot’s vision or temporarily blinding the pilot, the release said.

"The Timmins Police Service views this incident as dangerous," police said. "There can be no reasonable excuse that justifies this type of unsafe behaviour. The pilot managed to land the plane without further incident. However, if you see someone pointing a laser at an aircraft, report it immediately by calling the Timmins Police Service."

The incident appears to have taken place in the Pine Street South area of Timmins. Anyone with information is asked to call the Timmins Police Service at 705-264-1201 or Crime Stoppers at 1-800-222-8477, or online at www.p3tips.com.