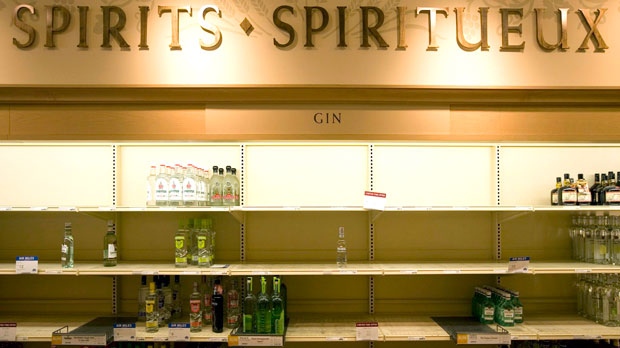 A few scattered bottles of liquor sit on virtually barren LCBO shelves in Toronto on Tuesday, June 23, 2009. The possibility of a strike by workers at Ontario's liquor stores prompted restaurateurs and residents Tuesday to rush out to stock up on booze, in some cases enduring lengthy lineups only to find already barren shelves inside. THE CANADIAN PRESS/ Darren Calabrese

Two Timmins teens broke into a liquor store and stole five bottles of alcohol on the weekend, police said, but one got away.

The front door of the shop, located at a strip mall on Waterloo Road, was forced open using tools early Saturday morning, Timmins police said in a news release.

Officers saw two suspects running away from the scene.

A 16-year-old was captured by police, while a 19-year-old got away.

The pair had stolen $218.75 worth of liquor from the store, police said.

As a result, the youngest accused has been charged with breaking and entering with intent, possession of property obtained by crime, possession of break-in instruments and failing to comply with a sentence. The teen was released from custody and is scheduled to appear in court on Feb. 28

An arrest warrant has been issued for the older teen.

Beto O'Rourke confronts Gov. Abbott on shooting: 'This is on you'

A news conference about the shooting at a Texas elementary school broke into shouting Wednesday as Democratic gubernatorial candidate Beto O'Rourke blamed Republican Gov. Greg Abbott for inaction ahead of the latest in a long string of mass shootings in the state.

Prime Minister Justin Trudeau cancelled plans to appear in person at a Liberal fundraiser in British Columbia Tuesday after RCMP warned an aggressive protest outside the event could escalate if he arrived, said a source close to the decision. The source spoke to The Canadian Press on condition of anonymity because they were not authorized to discuss the situation publicly.

Governor: Texas gunman said he was going to shoot up school

The gunman who massacred 19 children and two teachers at an elementary school in Texas had warned in online messages minutes before the attack that he had shot his grandmother and was going to shoot up a school, the governor said Wednesday.

Who controls the price of crude oil?

Do oil companies control the price of crude? CTVNews.ca asked experts to explain.

'Not parent expected': When a DNA test brings distressing results

While genealogical DNA tests may be marketed as harmless and exciting way for people to learn more about their ancestral heritage, CTVNews.ca speaks with a Canadian researcher who says more support is needed for those who get unexpected results that have potential to disrupt family relations.

Several parts of the country, including British Columbia and Canada's Maritime provinces, are likely to see wetter-than-normal conditions this summer, according to AccuWeather's annual summer forecast.

Later tonight, the six candidates on the ballot to be the next leader of the Conservative Party of Canada will be debating each other in Laval, Que. CTV News will be live-streaming the debate with English translation and offering real-time updates and analysis, and you can follow along.

The sex assault trial of Canadian musician Jacob Hoggard is hearing from a limo driver who drove one of the complainants to and from the Hedley frontman's hotel in 2016.