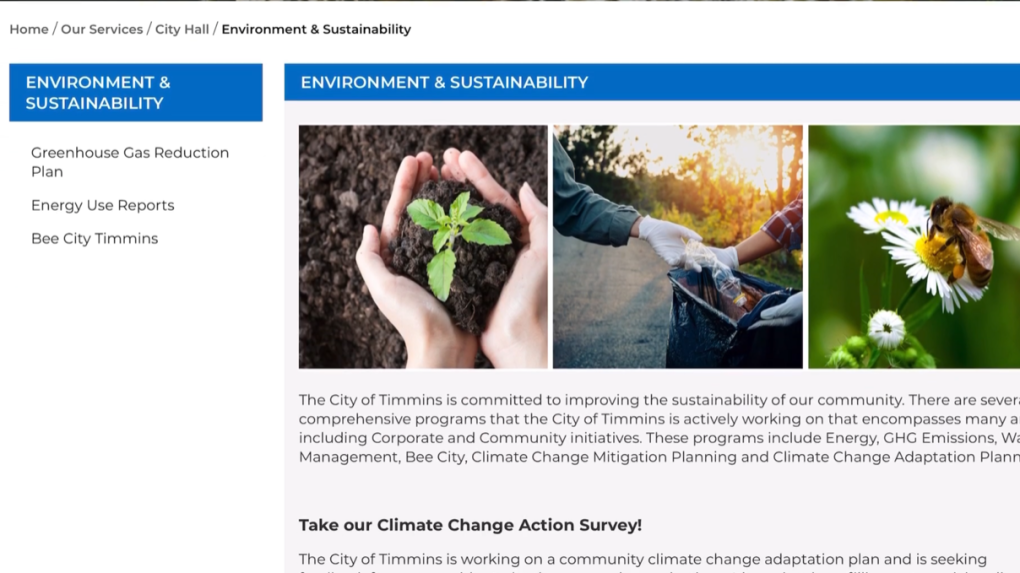 The City of Timmins wants to develop a plan for adapting to more frequent extreme weather events due to climate change — and it would like ideas from the community through an online survey.

The city's environmental coordinator, Christina Beaton, said northern communities need to figure out how to better adapt to events like extreme heat, heavy rainfall and an early spring.

"How do we adapt to and reduce the risks of an extreme rainfall event, what could we do?" said Beaton of suggestions she's hoping people will share.

"(We need) to prepare for that as a community. As a resident, a business, an organization, what would you like to see done?"

This is part of a 'climate adaptation plan,' which Beaton added is separate from other municipal programs working to reduce the city's contribution to climate change. This plan seeks to find out how to limit the damage of extreme weather to the community.

The city is working with a climate action non-profit called ICLEI Canada to develop this plan. The organization specializes in helping local and regional governments develop climate action policy.

Funding from Ontario's Ministry of Environment, Conservation and Parks—and from Environment and Climate Change Canada—is paying for this project, Beaton said.

Municipalities around the province are developing climate adaptation strategies as well, she said, including northern communities, which allows for collaboration and sharing of ideas.

"We're building off of each other, working with each other," Beaton said.

"ICLEI Canada has a lot of experience working in climate action, so they're providing us with the tools and the support."

Beaton added that community input is important as well, since people could have important insight into how past weather events have affected them and what the municipality could do to help.

The online survey will be open until January 3, with the city hoping to have a climate adaptation plan drafted in late 2022.

Monkeypox in Canada: Act now to stop it, expert urges, before it's too late

With 26 cases of monkeypox now confirmed in Canada, health officials warn that number will likely grow in the coming days and weeks. However, one expert says the outbreak can be stopped if the country works quickly to get it under control.

Canada's highest court has ruled that Alexandre Bissonnette, who murdered six people at the Quebec City mosque in 2017, will be eligible for parole after 25 years.

The gunman who slaughtered 19 children and two teachers inside a Texas elementary school was in the building for more than an hour before he was killed by law enforcement officers, authorities say.

Johnny Depp's lawyers ask jury to give actor 'his life back'

Johnny Depp's lawyers asked a jury Friday 'to give Mr. Depp his life back' by finding that his ex-wife, Amber Heard, committed libel.

Ancient volcanoes may have created a rare resource for lunar explorers

Ancient volcanic eruptions on the moon could provide an unexpected resource for future lunar explorers: water.

The National Rifle Association begins its annual convention in Houston on Friday, and leaders of the powerful gun-rights lobbying group are gearing up to "reflect on" -- and deflect any blame for -- the deadly shooting earlier this week of 19 children and two teachers at an elementary school in Uvalde, Texas.

One man is dead after being shot by police near a Toronto elementary school on Thursday afternoon. The incident sent hundreds of students into lockdown.