TIMMINS -- A full-time Timmins officer on foot patrol says she walks about six kilometres in a day while policing the city.

Const. Caroline Rouillard is a community services officer with Timmins Police Service who has recently been assigned exclusively to the role.

Rouillard walks around the downtown, the east end, and even in the shopping malls.

"I love talking with people and seeing people and going to businesses and letting them know police are there for them," said Rouillard.

"Walking the beat is 'old school' policing, but it pays huge dividends in terms of the relationships we garner from it with the business community; with the everyday citizen," said Marc Depatie, communications coordinator for the Timmins Police Service. "It creates a better sense of public safety for those persons. So in those terms, it's vitally important the police presence be bolstered by foot patrol."

The downtown has seen many challenges this year: the pandemic, effects of the opioid crisis and acts of violence.

"It is scary, but people have to know that there are people working in the background, that we are trying," said Rouillard.

She admits some days are harder than others.

"Sometimes we don't realize the needs or the people suffering. I surely didn't before having this job, but the most we can do is our best in trying to cater to everybody. It has changed my perspective on some stuff, but my number one responsibility here, what I signed up for, is to serve my community; to protect people," Rouillard said.

Depatie said it is too soon to make any conclusive decisions as to how effective the foot patrolling is, but says early statistics indicate the number of calls for service has dropped.

"I've noticed I've walked places sometimes and oh, a few people kind of disappear or things like that, but I have noticed the comments I get the most is 'it's so nice to have police officers walk around,'" Rouillard said. 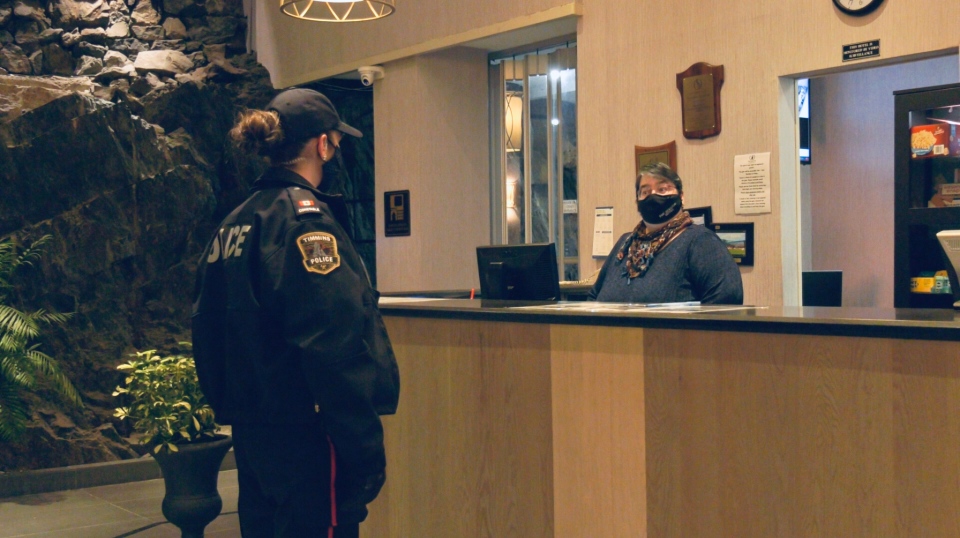 (Const. Caroline Rouillard enjoys meeting with local business people in Timmins. The Senator Hotel is a business that has expressed concern to police about people using its underground parking lot as a place to sleep or use substances. Oct. 12/20. Lydia Chubak/CTV Northern Ontario)

"It's wonderful to see a presence down here. It makes us a bit more safe, a bit more secure. Not only for us, as the merchants, but for local pedestrians," said Darren Taylor, owner of Steinberg and Mahn, a men's clothing store.

While Rouillard mostly works on her own, she does have back up: the mobile crisis response team, street outreach team, and platoon officers are there if she needs them.