TIMMINS -- If you ask comic book hobbyist Davis Dewsbury, he’ll say the upward momentum of his passion project, "Auric of the Great White North," is largely thanks to his talented team of fellow enthusiasts who have donated their time to it.

After recently winning two awards from the independent-Canadian-creator-promoting Sequential Magazine, one for Best Comic Book and the other for Best Writer, the team agrees that whatever they’ve each contributed to the project is working.

"What we try to do with Auric is have an adventure story that has a bit of humour in it, doesn’t take itself too seriously," said Dewsbury, who writes the comic’s storyline. "I think that plays well for a lot of readers. People don’t want things that are too lofty or too full of itself." 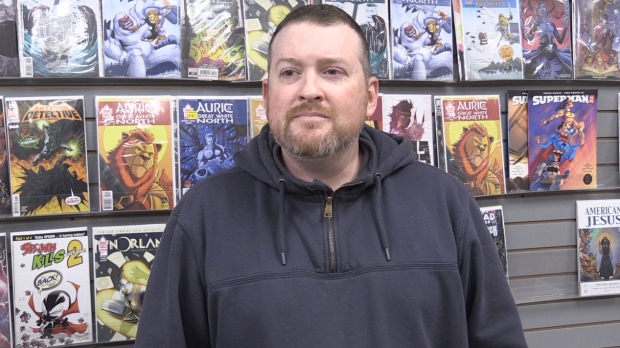 The story revolves around the titular character, Auric, a miner in northern Ontario that was exposed to a curse that turned countless townspeople into evil beasts but was saved by a goddess to control the beast inside him and protect his people.

The idea for the character started in 2015 as a mascot for local comic book convention TimminsCon. Dewsbury then reached out to an artist near Toronto to explore creating a full comic book series — eventually leading to other creatives in Quebec and Calgary coming on board.

Published through the team’s Great North Comics brand, Auric now has five issues and one issue of a spin-off comic. 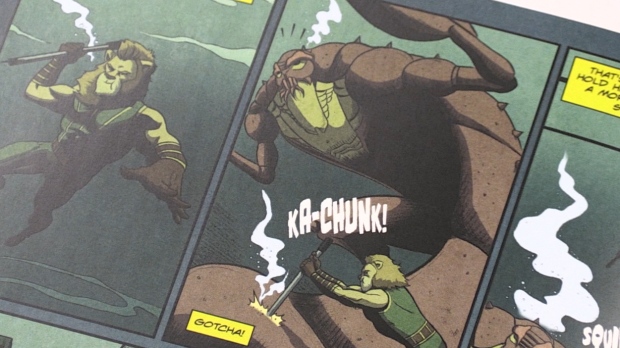 (The "Auric of the Great White North" series currently has five issues, along with a spin-off series "Norlan," based on on of Auric’s team members. Mar.1 /2020 Sergio Arangio/CTV Northern Ontario)

Having won and been nominated for several awards in the past five years, despite the challenge of getting noticed in urban centres, comic artist Andrew Thomas believes it speaks to the quality of the story and the potential of an untapped market.

"There was a lack of representation outside the big cities," said Thomas, who works at the publishing company in Toronto responsible for characters like Captain Canuck.

The comics often make reference to aspects of Timmins life, planting winks to local staples in its pages like 'Stars & Thunder' 'Schumacher,' even a Daily Press newspaper.

"It doesn’t hurt that people are noticing their slice of life is being represented in these comics," said Thomas.

The Auric comics are developing a humble readership, Dewsbury said, with local comic book store Jump City being a keen supporter. Its owners remarked that stock recently ran out and playfully demanded that Dewsbury restock its shelves.

Outside of the north, he said having a team member in a big city like Toronto helps get Auric exposure at conventions.

But he said that hasn’t stopped passionate readers of independent comics from finding his work.

"Just a couple weeks ago, we actually had an order come in from somebody from Cleveland (Ohio)," said Dewsbury. "I’m not sure how the word is getting out that far, but it’s exciting." 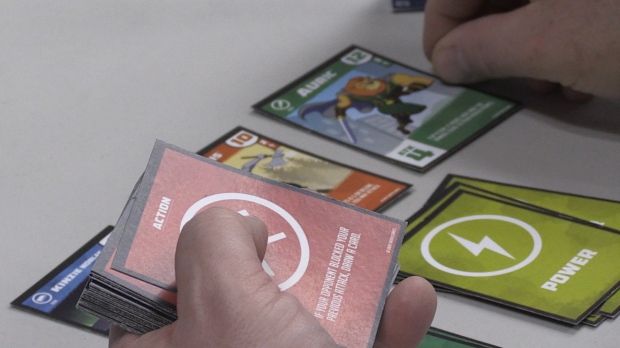 (The Great North Comics team plans to debut a card game based on the Auric comics at TimminsCon in April. Mar.1 /2020. Sergio Arangio/CTV Northern Ontario)

The team is now working on Auric’s sixth issue, and is planning to debut what they tout as the first Canadian comic book card game, "Auric’s Legion Strike," at TimminsCon in April.

The convention is the one time of year where the whole team flocks to Timmins and meets face-to-face.

Thomas said the hope is to capitalize on the momentum the comics have built so far.

"We’re just enjoying the ride,"  he said. "We are so glad and humbled that people are actually enjoying the Auric comics and that just really fuels us to want to get better and want to do different things."