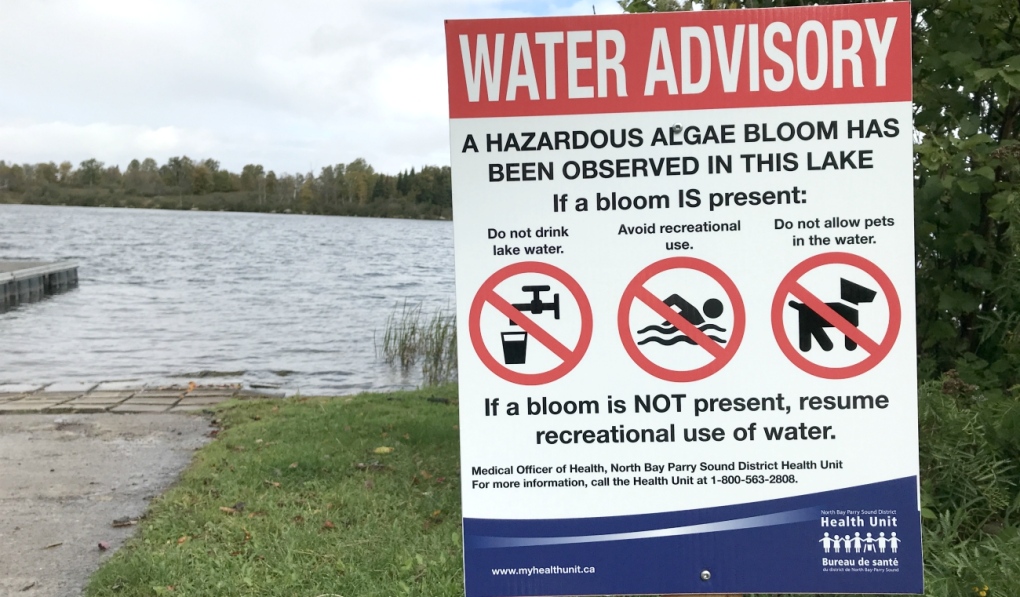 Three new blue-green algae blooms in the North Bay area bring the total up to eight so far this year. (Alana Pickrell/CTV News)

NORTH BAY -- Although swimming is over for the season for most, those who live along several lakes in the North Bay area still have to be careful of blue-green algae blooms.

"The primary risks here is usually recreational water, and if you're a pretty hardy soul you'd be swimming now, but that's probably unlikely," said Brendan Hatton a senior public health inspector at the North Bay/Parry Sound District Health Unit. "Probably the greatest risk right now is what your consumption of water is. If you're using lake water to draw for consumption at home or your cottage … that treatment won't destroy these toxins."

Boiling water or using a private water system will not make the water safe during an active bloom. Water use should be avoided completely including for cooking, bathing, brushing teeth and even for pets.

"You want to keep your pets clear of it, as well," said Greg Ross, a professor at the Northern Ontario School of Medicine. "There's quite a number of documented fatalities in pets world-wide every year."

"In the last day or so we've had three, one being Commanda Lake in Restoule, the south shore of Lake Nipissing and Lake Nosbonsing," he said.

Late in the year

Blue-green algae blooms are not uncommon, officials said, and the North Bay area is seeing similar numbers to previous years, although they typically occur in warmer weather.

"It is quite unusual to happen this late in the year," said Ross. "Usually blooms tend to be a lot more predominant when it's warmer, like July and August mostly. But it's not unheard of for it to flourish in colder weather."

The health unit does not send staff to inspect the lake. Instead, they rely on individuals to call in a possible blue-green algae bloom to the Ministry of Environment, Conservation and Parks. Following that, staff will go and determine whether or not the water needs to be tested.

"Once a body of water has been deemed to be positive for blue-green algae, it is not sampled again until next year," said Hatton.

Ross said there are a number of things that can be done longer-term to address the problems.

"If you look at places like the Muskoka's, the Muskoka's have much, much more legislation and regulation around how sewage is treated, what can be discharged into the water, how far it can be away from water lines and shore lines for example. That's not quite followed to the same extent in northern Ontario. In northern Ontario we have a lot more lax regulations in terms of how water is treated."

Hatton the use of fertilizers near the shoreline end up making their way into waterways, providing nutrients for algae.

"So we need to be a little more vigilant in that," he said.

Information on where a bloom has been confirmed can be found on the health unit's website.