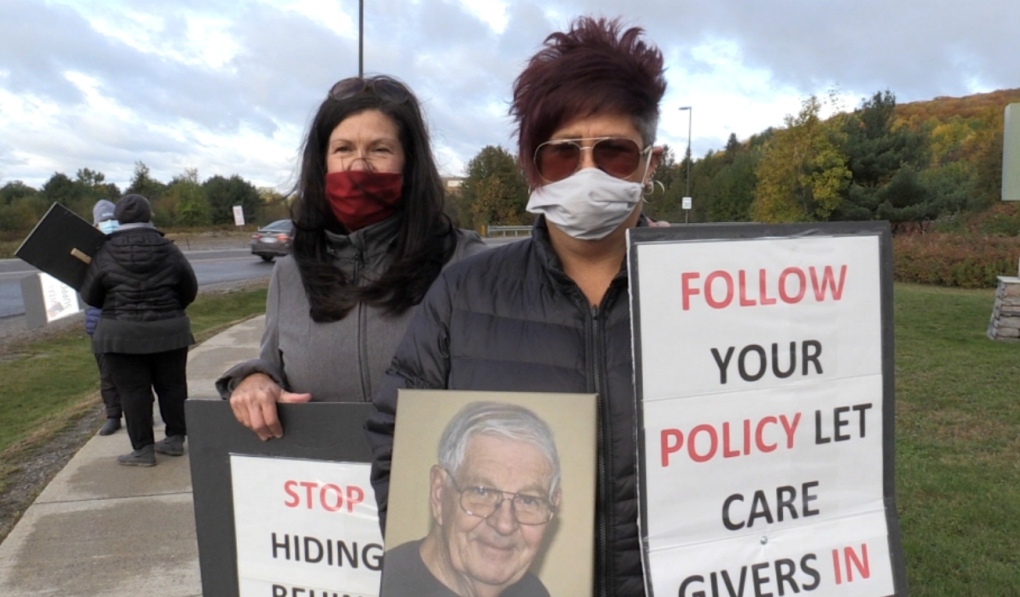 Protestors gathered outside North Bay Regional Health Centre on Wednesday to back demands that the hospital to give them better access to loved ones. (Eric Taschner/CTV News)

NORTH BAY -- The sound of cars honking their horns was music to the ears of a group of about 20 primary caregivers protesting outside of the North Bay Regional Health Centre on Wednesday. The group wants the hospital to give them better access to loved ones.

“Caregivers are made to stand in line and wait to go in and they can only go in for the two-hour visitation,” said March For Dignity organizer Diane Demers.

Demers became involved after her husband, who has dementia, was brought to the hospital. When she realized she wasn’t allowed to go in with him, she pulled him out of the hospital the next day. Her work began right after that.

According to the hospital's website, caregivers are allowed access to vulnerable patients under the age of 18, or who have cognitive impairment or developmental disabilities at any time.

"We should be allowed to able to go into the hospital at any time,” said Demers. “These people need our support and they feel abandoned. Let’s get on with it."

Patients that don't meet the requirements are allowed to have one dedicated care partner who can visit during regular visiting hours, which are 11 a.m. to 1 p.m. and between 5-8 p.m.

Leanne Comerford lost her father, Daniel, in July. He was admitted to hospital days after he fell and broke his hip. He had cognitive memory impairment, but Comerford was denied access the entire day he was in the hospital.

She said the hospital allowed him to sign a consent to surgery form, despite his memory impairment. She also said she was only allowed to visit for two hours a day, once a day. Days later he passed away.

Too little, too late

“The only time they're letting people in is when they're dying and that was what it took to see him,” she said, fighting back tears. “That shouldn't have happened. It was too little too late. The system failed him."

Demers has looked into the situation at other hospitals in Sudbury, Toronto and Hamilton. She has also asked hospital CEO Paul Heinrich to meet with the group to work out a plan.

“He’s aware that caregivers are being turned away,” said Demers. “Not that he’s going to fix it, not that there’s a plan in the works.”

David Georgei is fighting for his wife, who has Stage 4 cancer.

“We've been having treatment in the hospital since January," Georgei said. "She's had 12 bottles of chemotherapy and 15 radiation treatments. She needs my help and support. She's not capable because of her cognitive process after the chemo.”

In a statement to CTV News, the hospital cited COVID-19 as the reason behind limited visitation access.

“As we are now officially in the second wave of COVID-19, limiting access to the hospital is a necessary step to prevent the potential spread of COVID-19 and ensure the safety of our patients and the health care workers caring for them,” said the hospital’s spokeswoman Kim McElroy.

Demers said she will do what it takes to fight for caregivers, even if it means standing out protesting day after day.