Team northern Ontario prepares for the Scotties next month 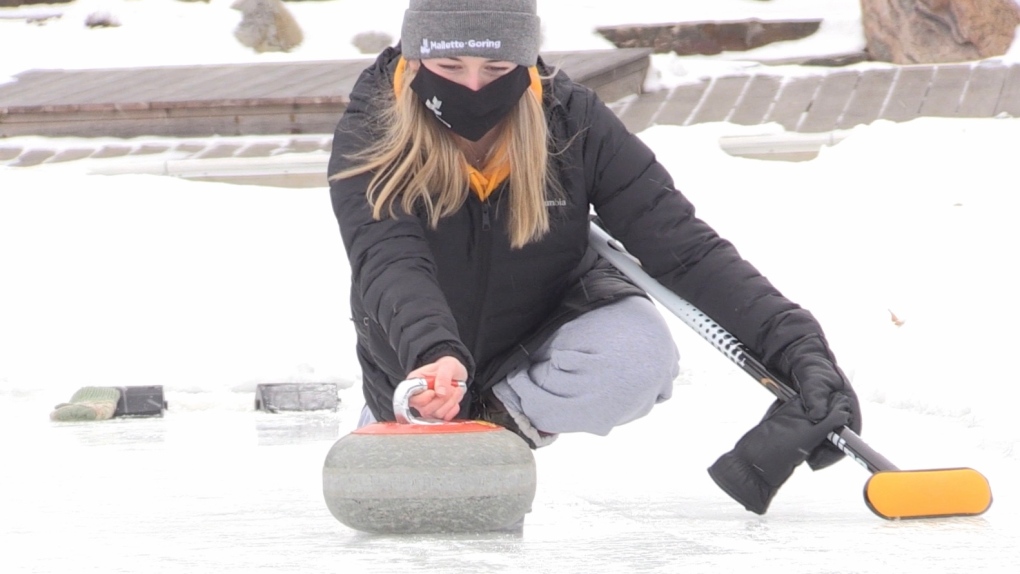 The lead for team northern Ontario, Amanda Gates decided to take advantage of her parent’s property that backs onto Ramsey Lake in Sudbury, by making their very own ice to practice on. Jan. 24/21 (Molly Frommer/CTV News Northern Ontario)

SUDBURY -- The women representing team Northern Ontario had to get creative during this lock down to in order to find ice before heading to the Women’s National Championships next month in Calgary.

The lead for team northern Ontario, Amanda Gates decided to take advantage of her parent’s property that backs onto Ramsey Lake in Sudbury, by making their very own ice to practice on.

“It actually wasn’t as much work as I thought it was going to be. It’s kind of one of those scenarios where it’s just the way it is. So, you can’t really stress about it,” said Gates.

“We’ve all been curling for so long that we’re hoping that the hours we’ve put in, in the past will hopefully carry us onto the tournament. But, just being able to slide here a little bit to keep ourselves loose and to keep the stretch going a little bit.”

Gates says this would not have been possible without some help.

“We actually had the ice maker from Idylwylde, he came out and helped me and our fifth Kira helped as well,” said Gates.

“I’m actually pretty happy with the outcome, because normally you’re able to pebble ice and here you can’t pebble it because it just disappears as soon as you put it on the ice so you’re basically sliding on a flat surface. We just put a flood down twice, put a hacks in the middle, built a wall behind the hacks to make sure that they didn’t move,” said Mike Assad, Idylwylde Golf & Country Club ice maker.

Team Northern Ontario will be competing against 17 other teams.

This will be Gates fourth time playing in the Scotties, but for her teammates this is tournament will be their first.

“In respect to that, it will be similar but just the level of play will be likely higher at the Scotties because those teams are just so good. So we’re just trying to do what we can to be the best prepared that we can be.”

The team will be heading to Calgary on Feb. 17.