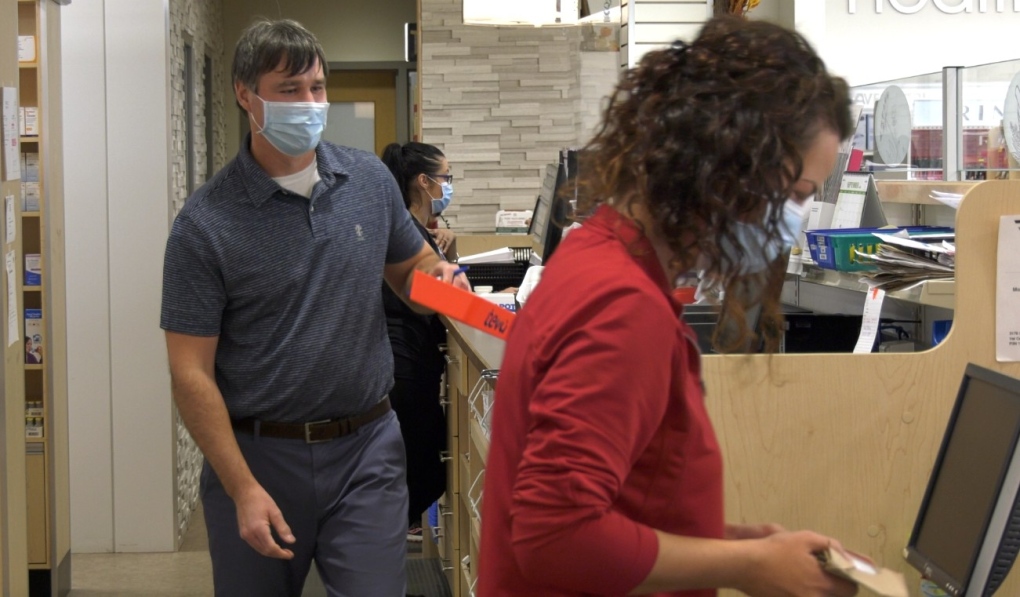 It's going to be a busy fall for health professionals, if demand for flu shots right now is any indication. A new Pharmasave survey of its customers suggests the drug store chain is looking at an eight per cent increase in the number of people looking to get vaccinated. (Ian Campbell/CTV News)

SUDBURY -- It's going to be a busy flu season for health care providers if a new survey of Pharmasave customers is any indication.

According to their study of more than 7,000 customers in Ontario and Atlantic Canada, 86 per cent of respondents are planning to get a flu shot this year, up from 78 per cent the year before.

More than half of those polled said they are feeling more anxious about getting sick this year and were planning on getting the shot.

"Each year has been busy, but this year I think it's going to be a little busier," said pharmacist Rob Bignucolo. "We've been fielding a lot of calls already, people hoping to come in soon. We're being told mid-October we're supposed to be getting them."

Bignucolo and the team have been busy getting ready at their Val Caron location in an effort to keep everyone safe and vaccinate as many people as possible.

He said their location will be by appointment only and they'll be bringing on an extra pharmacist for those days dedicated to administering the flu shot.

"People are a little more aware, a little more vigilant," Bignucolo said. "Those who didn't get it in the past will be looking to get it."

Health professionals still recommend getting the flu shot as we get into flu season, but they're warning people it won't prevent you from getting COVID-19.

While some health units have been strapped dealing with the added responsibilities of the novel coronavirus, Public Health Sudbury & Districts says it'll be ready once the vaccine arrives.

"Preparations are going very well," said public health nurse Lisa Bazinet. "Right now we're on track to deliver our upcoming flu season and vaccine as with last year's. We have connected with our health-care providers, with advisory alerts, just letting them know in the coming weeks that we will be rolling it out and requesting vaccine allocation."

Bazinet said they are still at the early stages and while every allocation is based on last year's figures, they still have to look at making it a fair and equitable distribution.

"We do want to make sure that all health-care providers have some vaccine available," she said. "We do have limited amounts at first because it is based on our first allocation, which we are hopefully set to get in the coming weeks."

She added they are doing their best to make sure all priority groups will have access to the vaccine.

No flu shot clinics this year

There will also be no public flu clinics this year in an effort to enforce physical distancing.

The Ministry of Health has also brought in high-dose vaccines to the pharmacies in an effort to help inoculate the province in a timely fashion.

They're calling on everyone to get the flu shot to make sure Canadians don't end up sick with the flu and taxing an already over-burdened health care system that's dealing with a pandemic.

Ontario's paediatricians have started a petition in an effort to help and they want to start administering that vaccine now before there is a real crisis.'

"Right now, public health seems to expect the status quo from years past, when individual doctor's offices and scattered flu clinics gave flu vaccines," the petition said. "But this year, there is a dramatically decreased capacity to administer flu vaccines."

The petition said the number of Ontarians who get the flu vaccine must rise from its usual 30 to 35 per cent of the population to higher levels, especially with young children over the age of six months.

The document goes onto add they and other family doctors are willing to help in planning large scale, community-based province wide clinics.

"These would ensure that we can safely administer flu vaccine universally throughout the province in large numbers, quickly and efficiently," it read.

Dr. Samantha Hill is the president of the central body of the Ontario Medical Association and couldn't speak about the specifics around the petition.

"It really does behoove us all to collaborate and there's expertise from so many different places right now whether it's public health, the ministry, the OMA, the RNAO, ONA - it doesn't matter," she told CTV News.

While the health-care system has faced a lot of challenges, she said she's been told by the government they have ordered extra supplies to deal with flu season and they remain committed to working together to support patients.

"My message this year is go get your flu shot, more this year than any other year, it's important," she added. "The reason why it's important is because we don't know what happens when you have the flu and COVID either simultaneously or back to back. They're both strong viruses than can floor someone."

"The second is reason is they're both similar viruses that look a lot alike and the outcomes are fairly different and we need to be able to differentiate the two as they come in through emergency rooms and as they come into offices to make sure that we can adequately protect our population," said Hill.