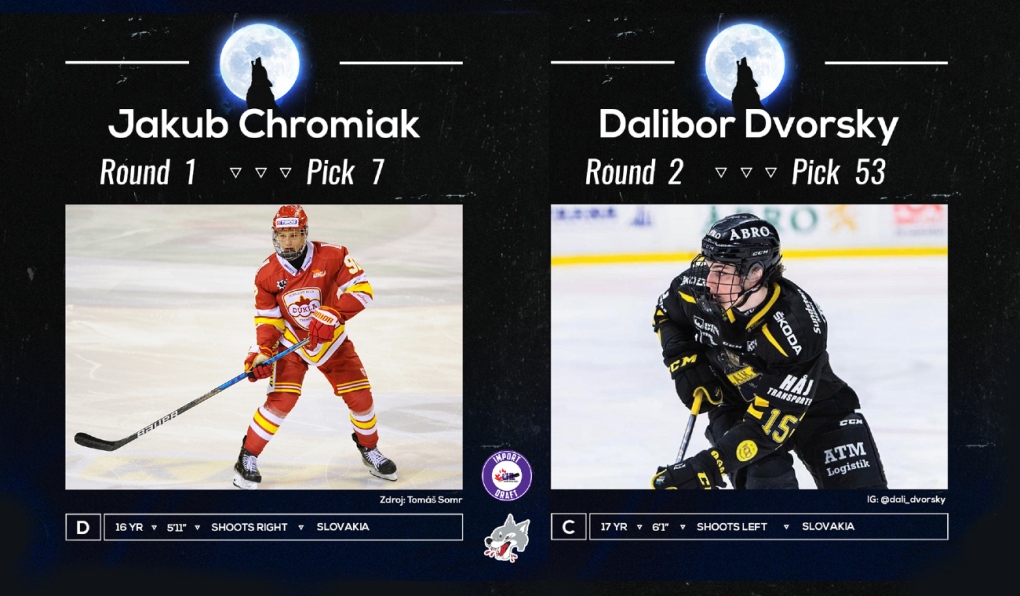 “The Sudbury Wolves are pleased to announce that they have selected two players from Slovakia in today’s 2022 CHL Import Draft,” the team said in a press release today.

In the first round, 7th overall, the Wolves selected right-defenceman Jakub Chromiak. During the 2021-22 season, Chromiak played for the Slovakia U18 national team as well as for HK Dukla Trencin U20.

“We are really excited with today’s draft,” said Sudbury Wolves general manager Rob Papineau. “We got two players that we were very high on. Obviously, we targeted Jakub with the first pick, and we feel he is one of the best young defenceman in the 2005 age group. We were very happy that he available at number 7 to select him.”

Jakub is regarded as one of the top defencemen in the import draft. He can play in any type of situation and has excellent vision. He is a strong puck moving defenseman who moves well in transition and is very adept in all three zones.

In the second round, 53rd overall, the Wolves selected centre Dalibor Dvorsky of the AIK IF JR of the J20 Nationell in Sweden.

“With Dalibour, he is actually one of the top prospects going into next year’s NHL draft and he is a guy that we highly sought,” added Papineau. “We do understand that he has some options, but we have had a great conversation already to congratulate him. He is a very positive young man, and we look forward to continuing our conversations with him and his advisor.”

Dalibor is a premium talent out of Slovakia who combines a great scoring touch with elite play driving skills. He was only one of only two 2005 born players to represent Slovakia at the most recently cancelled World Junior Championship.

Many trapped in Florida as Ian heads toward South Carolina

Rescue crews piloted boats and waded through flooded streets Thursday to save thousands of Floridians trapped after Hurricane Ian destroyed homes and businesses and left millions in the dark. The destruction began to come into focus a day after Ian made landfall in Florida as one of the strongest hurricanes ever to hit the U.S.

Helium shortage 4.0 continues, and it's not just bad for party balloons

Hundreds of royal fans lined up outside Windsor Castle for the chance to pay their final respects to Queen Elizabeth II as the chapel where the late monarch was buried opened to the public Thursday for the first time since her death. The queen's death certificate says the 96-year-old monarch died of old age.

The Toronto Blue Jays secured a playoff berth Thursday without even taking the field.

A Winnipeg father who fatally stabbed his three-year-old daughter won’t be eligible for parole for 18 years, a judge ruled Thursday afternoon.

The RCMP says Jeremy MacKenzie's arrest was not influenced by Conservative Leader Pierre Poilievre's request to have the Mounties look into comments about his wife.

Quebec's immigration and labour minister claims that newcomers to the province "go to Montreal, don't work, and don't speak French," though he later tweeted he expressed "his thoughts badly."

1 in 4 Ontario farmers contemplated suicide in past 12 months: study

There’s no way around it — Farming is one of the most stressful occupations on the planet. “Seventy six per cent of farmers are self identifying as having moderate to high stress levels. In general, that is much higher stress levels than the general population,” said Ontario Federation of Agriculture President Peggy Brekveld.

FinTok: How TikTok is changing financial literacy in Canada

Financial TikTok – or FinTok – has become one of the most popular trends on the platform, and is emerging as a go-to resource for Gen Z and millennial audiences looking to learn how to invest, budget or even spend more wisely.