Sudbury skyline changes as the Lockerby Mine Headframe comes down

It’s a change in history as the skyline in Sudbury now looks a little bit emptier.

On Aug. 8, the headframe at the Lockerby Mine site was demolished as part of the province’s Abandoned Mines Rehabilitation Program.

"Ontario is committed to the rehabilitation of abandoned mine sites to ensure the protection of public health and safety, as well as the environment," said the Ministry of Northern Development, Mines, Natural Resources and Forestry in an email to CTV News. "The demolition and cleanup work at the Lockerby Mine site demonstrates Ontario’s continued commitment to safe and environmentally sustainable mining."

The demolition project was done by local company Stacked Group Inc., which started up last year, in conjunction with Demaxx, a demolition company based out of Quebec.

"It’s pretty cool to be a part of it, first of all, because there’s not many opportunities to take down a headframe," said Steve Doucette, the co-owner and operator for Stacked Group Inc. "I think that’s maybe going to be our last one that we ever do and our first, so I feel pretty great about it and everything was a success. And that’s why we opened up our company, to do all different types of mining and blasting and everything else."

For both Doucette and Aaron Lambert, the other co-owner and operator, being on the front lines at the mine is no new task.

"Well, Steve and I, actually we were mining partners going back about 10 years together and we’ve been in the mining industry for over 15 years here in Sudbury," Lambert said. "So having that opportunity to be a part of Sudbury’s history was a great opportunity for us."

He said he has worked in almost every mine in town.

"You know, I’m comfortable here and it’s good to know that I can make a difference and that we’re part of the history too of change," Lambert said.

The partners said that the demolition took about four days on the ground to blast the headframe down and 2-3 weeks of administration work and planning beforehand. 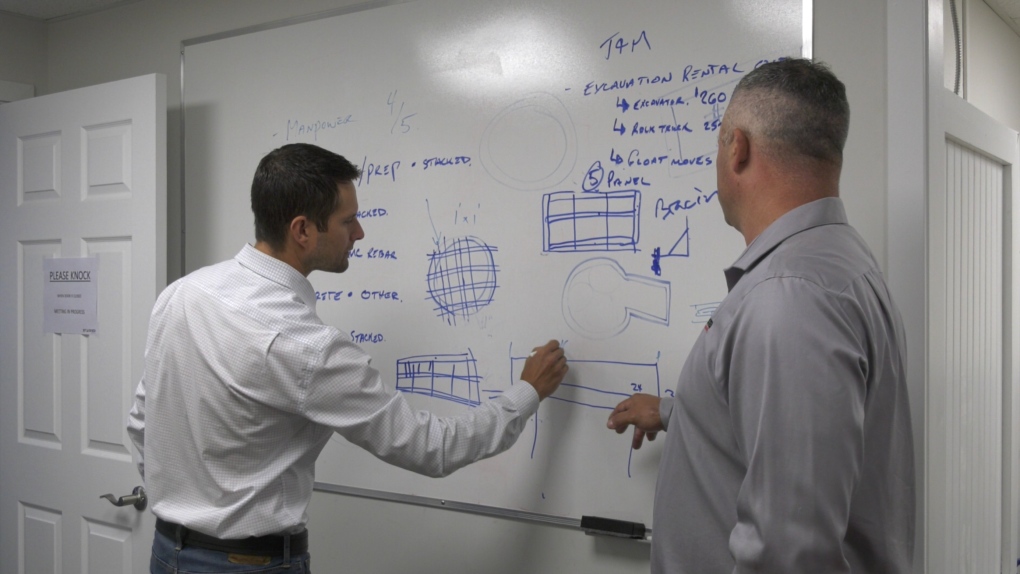 "Well, basically, we had to go in and devise a plan and submit it to the ministry," Doucette said. "We had to basically kind of figure out all our weight points and we devised a plan, and thank god everything came out as a success. And now we’re here and we have a good story to tell."

Lambert adds, "it was pretty straightforward, hands-on. We did our preparation. We did our drill setup. We did all the drilling. Then we came in, we loaded and blasted, and that was it. We were finished after that."

According to the ministry, the Lockerby Mine began operation in the 1960s and was sold by Falconbridge to First Nickel, who operated the mine from 2005 to 2015. It was used as a copper-nickel deposit during operation.

However, the Ministry became responsible for closing the site after First Nickel went into receivership in 2015.

"There’s quite a story on Lockerby Mine because it was a very dangerous mine," said Doucette. "So there’s going to be mixed feelings on that where there’s going to be some that actually been there through the tough times and the good times. And actually, some people went there just to see it come down because of loss in mining. Which is sad to say, but then there’s a lot of people that are sad to see it go because they were there for the duration of the mine."

Two men were killed in the Lockerby Mine in 2014 which resulted in a $1.3M fine towards First Nickel for its part in the deaths.

Now, the ministry is working towards closing the site permanently with the headframe being a big step towards that goal.

"I can tell my kids and grandkids that, yeah, I was there and I took that down," said Doucette.

As for Stacked Group Inc,. they plan to continue to bid on future projects and continue to provide job opportunities to other people in Sudbury.

Justice advocate David Milgaard, a man who was wrongfully convicted of murder and spent more than two decades in prison, has died.

Aaron Salter was one of 10 killed in an attack whose victims represented a cross-section of life in the predominantly Black neighbourhood in Buffalo, New York. They included a church deacon, a man at the store buying a birthday cake for his grandson and an 86-year-old who had just visited her husband at a nursing home.

As Russia retreats from Kharkiv, music returns in secret concert

In Kharkiv, Ukraine, you can still hear the sound of explosions, but now it's outgoing, with the Ukrainians firing at the Russians in retreat. Russia started withdrawing its forces from around Ukraine's second-largest city earlier this week after near constant bombardment.

The white 18-year-old who shot and killed 10 people at a Buffalo supermarket had researched the local demographics and drove to the area a day in advance to conduct reconnaissance with the intent of killing as many Black people as possible, officials said Sunday.

A man opened fire during a lunch reception at a Southern California church on Sunday before being stopped and hog-tied by parishioners in what a sheriff's official called an act of 'exceptional heroism and bravery.'

Not long before Russian President Vladimir Putin launched his invasion of Ukraine in February, CTV News' Chief International Correspondent Paul Workman returned to Afghanistan, a country he last visited in 2008 that is now faced with a humanitarian crisis under Taliban rule.

While the Red River is starting to recede in southern Manitoba, flood waters linger in communities and more than 2,000 people are still displaced.

Inquest to begin in N.B. police shooting of Indigenous woman during wellness check

The lawyer for the family of a British Columbia Indigenous woman fatally shot by police in Edmundston, N.B., during a wellness check two years ago said a coroner's inquest opening Monday offers a chance for her loved ones to get long-awaited answers.